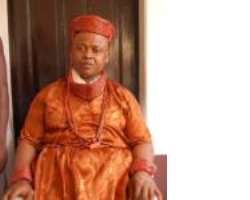 Obi of Ubulu-Uku
Listen to article

An atmosphere of disbelief and dumbness has enveloped the Idumuje-Ugboko community in Aniocha North local government area, Delta State, following the alleged ejection of the Queen Mother, Her Royal Majesty (HRH), Okwukwe Nwoko, from the palace, over allegation of infidelity, since the past two years.

But the Queen mother, Okwukwe, however, accused the crowned prince and his loyalists of sending her off to achieve his desire of succeeding the 90-year old monarch, who she said is now in miserable condition due to lack of care, even as she threatened court action to assert her position in the palace.

The monarch, Obi Agbogidi Nwoko III, reportedly married four wives but divorced two while one is dead, living Okwukwe as the only recognized wife staying with him before the ugly development. Okwukwe, 37, in an interview with newsmen revealed that she was unjustly accused of infidelity and was ejected when she was seven-month pregnant for the Obi, adding that all efforts to address the issue was rebuffed by her accusers.

She said trouble started after a failed plan to reconcile one of Obi’s former wives with the palace and some persons vowed that no wife of the Obi will remain in the palace since that move failed.

The Queen mother stated that when she was accused, she offered for a DNA test or to be allowed to take the traditional Oath to prove her innocence, but her accusers, working on speculations, also refused and drove her out on the basis of unproven case of infidelity.

Okwukwe claimed that while the matter was being addressed, she was stopped from entering the palace and before she could raise the alarm, her accusers threw her property out of the palace, seized her car and landed property and destroyed and locked up her shops that could have been her only means of survival now.

According to her, she lived peacefully with her husband before her enemies struck, adding that her husband has suffered an untold hardship since she was forced out of the palace, while the baby in question, who is now about three years old, has neither been seen nor touched by her father, the Obi, since her birth.

She appealed to the Obi-in-Council, opinion leaders and the royal family to intervene in the matter, stressing that she wants to go back to the palace and take care of her husband.

When contacted, the Iyase of Idumuje-Ugboko, Chief Chris Ogwu, while saying that the Obi-in-Council was yet to address the issue, contended that the traditional was not happy over the exit of the wife and has been suffering in silence, while efforts to chat with the crowned prince were in vain.

However, a member of the royal family who identified himself as Prince Obi Nwoko, who spoke to Journalists, insisted that Okwukwe was found to be pregnant outside wedlock and was ejected by the royal family according to tradition.

He alleged that besides sighting her severally in an uncompromised position, the baby in question was not a semblance of the Nwokos.