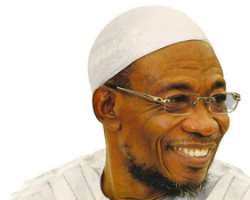 Against the background of opposition's criticisms of the MKO Abiola International Airport, Ido Osun in Osun, the Consultant Engineer to State â€ŽGovernment on the project Engineer Wemimo Adebajo, has revealed that the airport when completed would rank among airports with the longest runways in Nigeria.

Adebajo, during an inspection tour of facilities  at the airport with journalists stated that the present site of the MKO Abiola International Airport was the first place where aviation activities took place in the whole of West Africa.

The consultant, speaking on the percentage of work done at the airport noted that government, having spent N2.7 billion out of the revised total cost of N11billion for the project, work could be said to have reached 25 percent.

He added that the West African Frontier Force was lifted from the Ido-Osun aerodrome, the present site of the MKO international Airport project during the world war II, hence the conscious effort by the state to make it the best in Nigeria if not in Africa.

He told journalists that the tour of the facilities became germane to allow journalists be adequately informed about the magnitude of the work done in order to situate the criticisms of the opposition in their proper context.

According to the Consultant, the runway of the airport waiting to be laid with 500 mm asphalt is 3.5 kilometre in length, 12.3 metres excavation and re-filling with laterite. He added that both sides of the runway are equipped ab initio with water pipes which will be the first of its kind in Nigeria.

He explained that with such a feature, the airport will have been equipped with facilities that will make emergency fire fighting readily available near the runway in case of any emergency landing or fire outbreaks.

He pointed out that though the runway has not been completed, but in case of an emergency, the runway at its present state can be used by any pilot to land an aircraft at the MKO International Airport.

“Still more to be done, I believe the airport is good for the state. The main delay right now is a question of funding and the state is seeking ways on how to make it available.

“We are approaching the Federal government for 50 percent of cost of building the airport which is Federal Government policy, right now. What the contractor is doing is site maintenance so as to ensure that when work resumes there won’t be any case of deterioration of the huge work that had already been done here.” The Airport Consultant stressed.

Adebajo also added that the Control Tower nearing completion is at the third floor of four  sitting on a foundation of an excavated ground of nine metres.

He said, “A lot of work has been done, and as we go round, you will see the control tower which we have built and it is almost completed. You will see the terminal building built to the foundation, the airport fire station has reached the stage of roofing.

“The runway is going to take about 60 percent of the cost of any airport project, a lot of work has been done on the runway, there are about 8 streams in the path of the runway. It therefore became necessary to excavate and build box covets so that the water in the stream will flow unhindered under the runway.”

He explained that the essence of the facility tour of the airport with Journalists was to allow people know what the state is doing at the airport and not just respond to allegations.

“I think the State government is trying to make sure that the press, the people of the state and Nigeria as a whole are briefed on what they have actually been doing. If it was just to respond to some political allegations, you will be talking to a politician, not a technocrat like myself.

“I have actually read in the newspaper that the contract has been inflated to 15.5billion Naira which is not true, I have just told you it is 11billion Naira and if you compare this with every others in Nigeria, you will realise that the cost of this one is cheap”.

In an earlier statement issued by the Government, Director, Bureau of Communication and Strategy, Semiu Okanlawon, had debunked insinuation of contract inflation, saying considering exchange rate factors, and the fact that the scope of the project was reviewed to make the airport more sophisticated than earlier projected, allegation of inflation was mischievous and misplaced.