If I'm president, 'Christianity will have power' in the US: Trump 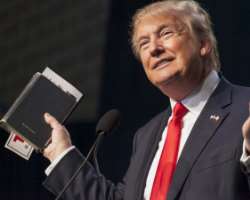 (REUTERS/Brian C. Frank)
Donald Trump holding a bible.
Billionaire businessman Donald Trump suggested on Saturday that he would have had “less difficulty” if he had proposed barring Christians from entering the US instead of Muslims.

Last December, the Republican presidential front-runner ignited a national firestorm by proposing to suspend all Muslim immigration and tourist travel into the US.

“If I said that about Christians, and if I said ‘banned,’ I’m telling you I would have had less difficulty,” Trump said Saturday. “And that’s pretty sad, because we’re Christians. I’m Protestant. I’m Presbyterian.”

Some of Trump’s critics have questioned the sincerity of his faith , noting that the real-estate mogul recently said he doesn’t like to ask God for forgiveness.

But Trump unequivocally embraced the evangelical Christian community throughout the start of his Saturday speech in Sioux Center, Iowa.

“I’m a true believer. And you’re many true believers — I hope all — is everybody a true believer in this room? I think so. But Christianity is under tremendous siege,” Trump told supporters at Dordt College, a Christian liberal-arts school.

The real-estate mogul lamented that Christians do not wield as much political influence in the US as they could.

“The power of our group of people together, I mean, if you add it up … it could be 240, 250 million. And yet we don’t exert the power that we should have. Now, I think some of the churches are afraid of their tax status, to be honest,” he said.

“But you know the fact is that there is nothing the politicians can do to you if you band together. You have too much power. But the Christians don’t use their power,” Trump said. “We have to strengthen. Because we are getting — if you look, it’s death by a million cuts — we are getting less and less and less powerful in terms of a religion, and in terms of a force,” he continued.

Trump then complained that big department stores do not say “merry Christmas” during the holidays.

Trump vowed to change the department-store situation when it comes to wishing people “merry Christmas.”

“I’ll tell you one thing: I get elected president, we’re going to be saying ‘merry Christmas’ again. Just remember that,” he said. “And by the way, Christianity will have power, without having to form.”