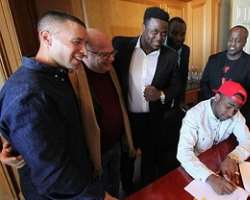 A while ago, Global music giant, Sony Music signed a multi-millionaire deal with Nigerian sensation, Davido.

The singer who is still caught in the euphoria of the global deal has been reciveing contragulatory messages from fans and colleagues.

Meanwhile, prior to Davido announcing the news on Instagram and even after the announcement, there has been no word from the organization on its social media platforms. For instance, there was no word on its twitter handle, instagram page, facebook and on Sony Music website, which makes some critics begin to wonder the authenticity of the 'deal'

Nevertheless, Davido shared photos of a signing ceremony,on his instagram and twitter pages to announce that he has inked a new international deal in New York with the global music giant.

Aside the record being a global deal, details of the deal is not unknown although a section of the Nigerian media have insinuated that it is worth $1 million.

We keep our fingers crossed to know the outcome of this in few days time.