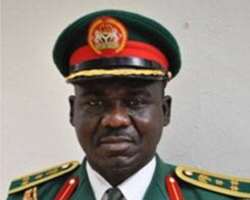 AS the Nigeria Army is winning the Boko Haram insurgency war to secure peace and unity of the country, the chief of Army Staff, Lieutenant-General Tukur Yusufu Buratai has urged Nigerians not to through sects or their individual’s negative attitude, actions and behavior ridicule the Army in their constitutional responsibility and fight towards ensuring the security and peace of the nation.

General Buratai made this remark on Tuesday 19th January, 2016 at the head quarter of the National Human Rights Commission (NHRC) in Abuja Nigeria, at the opening of the sitting of the special panel set up to investigate human rights abuse in the course of the clash between the Army and the Shiite Islamic Movement of Nigeria in Zaria, Kaduna state on the 12th of December, 2015.

In this day of war against terrorism in the country, government is intensifying media campaign to inform and educate the people on the need for vigilance and to be security conscious in all they do and wherever they find themselves.

On the Shiite- army clash investigation sitting, General Buratai has called on all persons or group of persons involved in the matter to be transparent and sincere in their testimonies so as to enlighten all Nigerians and the world about what really occurred that aggravated the anger of the General’s motor cade convoy to take drastic military measures to defend and protect the Army Chief of staff from mob attack of members of the Shiite group.

In his testimony at the Human rights commission panel in Abuja, General Buratai said, “No society will develop where lawlessness, peace and tranquility of the average citizen is being trampled upon.”

General Buratai in his testimony pathetically expressed his feeling and the embarrassment he suffered in his testimony saying, “ I left Dutse, the capital of Jigawa State to attend the 73 regular recruit military intake passing out ceremony in Zaria of which I was pressing to be there on time and my convoy was blocked in the city of Zaria, I was in the convoy, it was my convoy, the convoy of the Chief of Army staff. We acted on the Nigerian Army rules of engagement and code of conduct.” The Army spokesperson, Colonel Sani Usman a member of the convoy who knows how grievous and dangerous an offence is the hindering of passage way to the three star general’s motorcade convoy said, “The incident was an assassination attempt on the life of the Army Chief of Staff by members of the Shiite Islamic group on the day in question.”

Throwing more light on what happened on the day of the clash, Colonel Usman said, “Shiite members barricaded the road the army chief was passing to pay courtesy call on the Emir of Zazzau before attending the passing out ceremony he came for in Zaria. The Shiite members numbering hundreds carried dangerous weapons, barricaded the road with bonfires, heavy stones and tyres and they refused all peaceful plea to dissuade them. Then they started firing and pestering the convoy with dangerous objects.”

Lt. General Tukur Yusufu Buratai is one of the four new service Chiefs decorated by President Muhammadu Buhari on 13th August,2015 in Abuja, Nigeria. Swearing them in, the President amongst other three important problems facing the nation urged them to ensure that armed bandry, kidnapping and other forms of criminality are phased out in the country.

Expressing this view at the ceremony he said,” You are been elevated and decorated as first class senior officers of the Nigerian army with sterling leadership qualities, I therefore have no doubt in my mind that all of you are equal to the task ahead of you.”

The Kaduna State Governor, Mr. El- Rufaii who felt unhappy about the sad incident that claimed the lives of many Shiite members has instituted a 13 member Judicial Commission of inquiry to find out the real cause of the clash and find ways to prevent future occurrence

Kaduna is the capital city of Kaduna state an economic center for trade and business and has a long standing history as a training ground for military cadets in Nigeria. Zaria apart from being the seat of the premium Ahmadu Bello University has the long established military school for young primary school leavers who wants to take up military profession.

Report gathered in respect of the clash indicated that there is a long existing strife between the Army and the Shiite movement in Zaria.

State and Federal investigations in respect of the clash must confirm to Nigerians that it is not in any way a sectarian fight, must come up with sanctions and punish all those found guilty to prevent future occurrence and to serve as deterrent to others for peace in the area

Detail about the Islamic Shiite Movement must meet government regulation for its establishment and spread to enhance the spiritual growth and wellbeing of the people making sure it has no link or roots with the world most feared Islamic state group, Aiqueda or the Boko Haram terrorist group in Nigeria