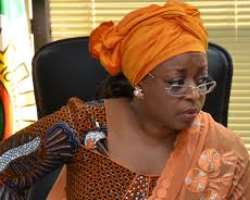 Former Petroleum Resources Minister Mrs Diezeani Alison-Madueke was sited at the  Charing Cross Police Station in London as part of the investigation into the allegation of money laundering against her.

According to a report in the Nation citing  Television Continental (TVC), Mrs Alison-Madueke was granted bail on the same condition given earlier and given a June 21 date to return.

Last October, the former minister was arrested by the UK National Crimes Agency, alongside four others.

She was accused of fraud and money laundering in the United Kingdom using a network of relatives and businessmen.

Diezani who has been in London even before the inauguration of Muhammadu Buhari administration is said to be undergoing treatment for cancer.

Most Nigerians believed that her that her sickness plea was just a mere ruse to escape justice until a picture show an emaciated visage of once elegant lady kept many shut on such thoughts.