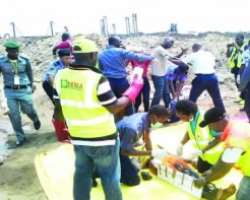 Residents of  the Oworonshoki area of Lagos were on Thursday thrown into panic during a simulation of a plane crash in the area the officials of the Lagos State and the Federal Government.

The exercise was meant to assess the level of preparedness on the part of emergency agencies in handling disasters, but there was no forewarning to the residents of the area.

According to a PUNCH report, as residents saw a plane plunged into the Lagoon, there was pandemonium as they thought the crash was real. Many of them ran towards the plane in a bid to save “trapped victims.”

It will be recalled that a Bristow helicopter with 12 persons on board had crashed in the area on August 12, 2015, killing six people, including the pilot.

The residents said the simulation looked real and was a sad reminder of the August 2015 crash.

A resident, Bola Oluwadare, said it took him some minutes to know that the crash was an exercise, adding that residents were caught unawares.

He said, “I was dressing up around 11.30am when I heard people shouting that plane had crashed again. I ran out to see what was happening. It was after the emergency agencies arrived that we knew it was an exercise.”

A shop owner in the area, Tajudeen Olagunju, said the scare created by the simulation caused many people to abandon their shops.

“I thought it was a repeat of the August 15 incident and so did most of us. I think the agencies did not inform us so that it would look real,” he said.

The spokesperson for NEMA, South West, Ibrahim Farinloye, said the agencies responded 15 minutes after “a distress call”. He said the exercise enabled the emergency agencies to know their strength in managing disasters.

He said, “The exercise was to determine our level of preparedness in disaster management. The carcass of a plane was dropped into the Lagoon at about 11.30am. Five helicopters of the Nigerian Navy, the Nigerian Airforce and Bristow were deployed within 15 minutes after the alert. Two ships from the Nigerian Maritime Administration and Safety Agency and the Nigerian Navy, two doctors and 30 nurses were also on the ground. Thirty local divers were first to respond.

“We assumed people on board were foreigners and the Nigerian Immigration Service was there to check their nationalities to know whether some of them were of questionable characters. Traffic was the challenge we faced to arrive at the scene, but a helicopter assisted us to drop some divers via parachutes.”

The General Manager, LASEMA, Mr. Michael Akindele, said the exercise would also assist in areas such as coordination, response time, capacity building and the use of equipment and personnel during emergencies.

“The larger community was not informed so that residents will also know that it is their responsibility to assist in emergency management,” he added.