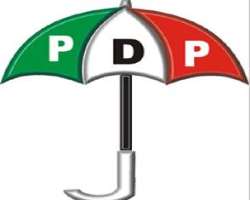 Governors of the Peoples Democratic Party (PDP) have described as a new low the handcuffing of the National Publicity Secretary of their party, Olisa Metuh, by prison officials while presenting him before the courts.

The governors while accusing the Federal government controlled by the All Progressives Congress (APC) for the disgrace meted out to Metuh said the action shows that the APC regime was a step away from full blown fascism.

In a statement signed by the coordinator of the PDP Governors Forum, Earl Osaro Onaiwu, said the action was meant to deride not only Metuh but the PDP, as well as cast the party in bad light before Nigerians as a party of corrupt individuals even when they were yet to be convicted by any competent court.

Accusing the government of playing to the gallery, the governors said the 'APC regime was yet to learn from history, therefore its banal exhibitionism and Telemundo antics of subjecting accused persons like Metuh to inhuman treatment.'

'The only reasonable conclusion we have reached is that the anti-corruption agencies and other institutions of state have allowed themselves to be dictated to by a single vindictive authority which takes pleasure in using power anyhow and in anyway in gross abuse of the constitution, African Charter on Human and Peoples' Rights and human liberty.

'The cuffing of the National Publicity Secretary of the PDP exemplifies a terrible decay of power by the APC regime which sees itself bigger than the democratic state, Nigeria, which brought it to power.

'For the avoidance of doubt, the Forum is not against the anti-corruption mantra of the present regime of President Muhammadu Buhari, but we insist it must be within the ambit of our constitution and appropriate laws.

'Any other means is a descent into fascism with its attendant consequences in the long run,' the statement reads.

Osaro further observed that Section 34 (1) of the Constitution of the Federal Republic of Nigeria 1999 as amended, frowns at all forms of degradation of man particularly inhuman or degrading punishment and treatment, of which Metuh was subjected to.

The governors called on security and anti-graft agencies to be mindful of how they take instructions from political office holders saying the tide of power is constantly moving, and that the APC will not be in power forever.

They also urged civil society 'to resist such ultra-constitutional actions before Nigeria becomes the private estate of the APC'. - Daily Independent.