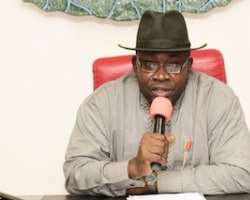 Governor Dickson has submitted the budget of N150.645billion for the 2016 fiscal year.

According to the Governor, the state government plans to spend N99.380billion as recurrent expenditure with N51.265billion earmarked for capital expenditure.

The Governor named the 2016 Appropriation Bill “Budget of Transition”, while presenting it to the House of Assembly in Yenagoa for consideration.

He said the budget would prioritise the completion of ongoing projects and programmes of the state in the new fiscal year.

The Governor also told the members of the Bayelsa State House of Assembly that “security will receive massive investment” in view of the magnitude of violence that characterised the just-concluded state governorship election.

The state government said it intended to spend N43.126billion as personnel cost and N20.270billion as overhead, while consolidated revenue fund charges stood at N6.850billion and capital expenditure was N25.399billion.

Tourism – N1.150billion
Housing – N1billion
Transport – N1.420billion
Power – N720million
Water Resources – N384.240million
Information – N460million
Finance – N200million
Budget and Economic Planning – N250million
From the above breakdown we could see that the budget is line with the prevailing economic situation of the country and the world in general.

EDUCATION SUB-SECTOR - N4b
Looking at education we know that the governor has already done so much in education, so with N4b, the government will consolidate the gains already achieved in the educational sub sector.

Recall the the restoration government has already spent N23-25b in education alone in his first tenure so this time around, we shall see some or all of the numerous professional schools he has built for the youths of the state.

AGRICULTURAL SUB-SECTOR
This is another area the restoration government has invested so much during the first tenure.

Now, the sector has a budget of N1.365b. It is expected that the various rice, cassava, palm plantation, sea food facilities with some fishing trawlers owned by the state government etc, it is expected that the sector will produce enough food items with other Agricultural produce that will stimulate self sufficiency in food production, creation of employment, and create internally generated income for the state.

HEALTH SUB-SECTOR - N2b
The restoration government has done very well in the health sector of the state with the construction of new general hospitals in the various local government Areas and renovation of numerous hospitals and health centers here and there.

So with this modest provision of N2b, the health care needs of our people will definitely be improved.

The good thing about providing basic infrastructure is that the state may not build new health care centres so much, but will complete and consolidate the gains already made in the health care facilities provided during the first tenure as governor of the state.

TOURISM SUB-SECTOR N1.150b
You will recall that the restoration government has done so much in the Tourism/hospitality sector during the first tenure.

We are all aware that Bayelsa state is the first state that has build an International Institutes of Tourism and Hospitality with is ready for use.

So with the provisions made available, the institute is expected to take off during this second term. This will no doubt boost internally generated income as well as producing graduates of Tourism and Hospitality which will make our people self-employed.

It will also provide massive employment of our teeming unemployed youths and adults as well. This could only be achieved by a man of vision like the countryman governor, Henry Seriake Dickson.

At this time of the sharp decline in Oil and Gas earnings, the take off of this institution cannot be overemphasized.

SPORTS SUB-SECTOR -N1b
This is an area that past governments of the state has neglected, but the countryman governor has realized the need to develop sports because it will create opportunities for our youths who might want to take up sports as their career.

In fact, the Restoration governor has witching the first tenure built an Institute of Sports, so I believe with this modest provision, the institute will take off eventually, thereby creating opportunities for our sports-loving populace to create income that will enhance their living here and wherever they choose to engage in sporting activities.

You will recall that as a lover of sports and the benefits Bayelsans could achieve from sports, the country man governor has built stadia in Nembe city and other LGA headquarters to further the development of the sector in the state.

From the above we could see that all these could not be achieved if a second term was not to be.

A government could only do more if its programmers are given a reasonable time to consolidate the gains already made during the first term.

The governor has put in place numerous self-sustaining programmes which this budget of sustenance will consolidate.

We thank all those who voted massively for the continuation of the restoration government without which the dream-killers would have truncated these noble goals Bayelsans will achieve in the second term.