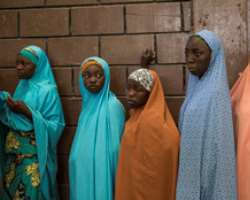 As conflicts and crises in Africa took a more complex turn in recent years, there has been a devastating upsurge of violence against women and girls. The abduction of 200 Chibok girls from a school in northern Nigeria by Boko Haram militants in April 2014 remains a tragic case in point. So has the sexual violence being used as a weapon of war in Cameroon, Chad, the Democratic Republic of the Congo (DRC), South Sudan and Sudan, among others.

Women and girls are singled out as targets by terrorist and extremist groups, who abduct them and use them as suicide bombers or sex slaves. Although women generally despise war, their bodies have become the new battlefields. Worse still, they are not consulted on issues of peace and nation-building, according to Zainab Hawa Bangura, the special representative of the UN secretary-general on sexual violence in conflict.

In Africa women play important roles as custodians of culture and nurturers of families, yet in times of conflict they are not represented at the peace negotiating table or in community reconstruction efforts. According to UN Women, a UN body that promotes women’s empowerment and gender equality, women constitute fewer than 10% of peace negotiators globally and only 3% of signatories to peace agreements.

Many experts believe that leaving women out of peace and security processes hinders communities from finding long-lasting peace. In times of conflict, women’s vulnerabilities and unique needs are often forgotten during negotiations, which in turn limits the effectiveness of both peace and security agreements, and humanitarian responses.

Fifteen years ago the international community recognized the importance of women’s participation in creating the conditions for permanent peace. On 31 October 2000, the UN Security Council adopted the landmark resolution 1325 on women, peace and security, which acknowledged the critical role women could play in preventing and resolving conflicts, negotiating peace, participating in peacekeeping and in humanitarian response and post-conflict peacebuilding.

Among other things, the resolution calls for women to participate fully in all efforts to maintain and promote peace and security. The resolution also requires the UN to solicit and take into account all viewpoints on gender issues in order to increase the role of women in all peace and security activities. It also requires all parties at war to take special measures to protect women and girls from gender-based violence, particularly rape and other forms of sexual abuse.

Despite these requirements, UN Women says the percentage of women in peace talks has stagnated at single digits since the resolution was passed. The results have had a devastating impact on women’s lives: over half the world’s maternal deaths occur in conflict and fragile countries; about half of out-of-school children of primary school age live in conflict areas; and girls’ net enrolment rate in primary education is 17 points below the global rate. In these conflict areas, the risk of sexual violence, child marriage and HIV infection has increased since 2000.

The resolution was passed on the eve of International Women’s Day in 2000 after “extensive stonewalling” by some members, recalls Anwarul Chowdhury, a former permanent representative of Bangladesh to the UN, who was the president of the UN Security Council at the time.

As the world marked the resolution’s fifteenth anniversary in October, UN Secretary-General Ban Ki-moon launched the global study on resolution 1325, carried out to determine how it has been implemented since its inception. According to the study, Preventing Conflict, Transforming Justice, Securing the Peace, the resolution has had a remarkable impact on women’s participation in all areas of peace and security. “I have highlighted women’s leadership in peacebuilding as a priority. I have asked 15% of all peacebuilding funds to be devoted to advancing gender equality and women’s empowerment,” said the secretary-general during the launch of the report. “We have made some advances but we must do much more, and we must do it faster.”

Achievements in Africa
Several African countries have embraced resolution 1325, and 16 states now have relevant national action plans in place. The African Union (AU) has also made significant efforts to integrate commitments to the idea of women, peace and security into its own security, crisis-response, human rights and peacebuilding efforts. The organization trains women as peace mediators, election observers and gender advisers.

In January 2014 the AU appointed its first special envoy for women, peace and security. BinetaDiop helped coordinate Africa’s efforts in implementing 1325. Since her appointment, Ms. Diop has worked closely with the UN, touring conflict areas in Africa. In the Central African Republic, the plan is to dedicate funding to support women’s participation in the forthcoming elections, rule-of-law reform and transitional justice mechanisms.

At the same time, both the AU and the UN have increased the number of women military and police officers in peacekeeping missions, which has in turn improved the reporting of sexual assaults. They have also set up units that provide protection to civilian victims of abuse. Similar units that shelter victims of gender-based violence also exist in Somalia and the Darfur region of Sudan. In Rwanda, Liberia and the DRC, the UN provides support to survivors of gender-based violence.

Challenges
Despite impressive efforts on the ground, there are still challenges when it comes to women, peace and security in Africa. Ten years after resolution 1325, the DRC went through a horrific conflict in which hundreds of women were raped. Horrified by the magnitude of the situation, the then-UN special representative for sexual violence in conflict, Margot Wallström, described the country as the “rape capital of the world.”

“The recent cases in South Sudan have compounded the reality that indeed progress has been slow and that women continue to bear the brunt of violence during times of war, and unfortunately even during times of peace,” said Ms. Diop, the AU envoy, speaking at a high-level meeting held at UN headquarters recently.

Moreover, the lack of time-bound targets for achieving the goals of the resolution may have slowed action, as countries were not under pressure to beat a set deadline. Also not spelt out was how countries would monitor and evaluate women, peace and security initiatives to provide evidence of progress. “Reporting mechanisms through the Security Council or [a] watch list of countries failing to meet the resolution’s objectives were not established,” said Namibia’s deputy prime minister Netumbo Nandi-Ndaitwah during Africa Week, last October.

Where is the money?
Despite some progress, gaps in the implementation of resolution 1325 persist in Africa, in part because of lack of funds. “We have made some advances, but we must do much more, and we must do it faster,” Mr. Ban told reporters at the launch of the global study, which was commissioned by the UN Security Council.

The study found that unpredictable and insufficient funding, lack of data analysis on gender issues and also lack of technical expertise on gender, attitudinal obstacles, and insufficient mapping of needs in planning and budgeting have harmed the long-term effectiveness of interventions for peace and security, humanitarian causes and development.

“The most immediate solution is to divide the funding pie more equitably,” says Africa Development Bank (AfDB)’s special envoy on gender, Geraldine Fraser-Moleketi. “It is important to expand the funding pie for women, peace and security so that gender is not seen as a zero-sum game.”

The AfDB has since established a fund—the Global Acceleration Instrument for Women, Peace and Security (GAI-WPS)—to provide flexible rapid support to governments and organizations responding to emergencies. “The GAI-WPS aims to raise $100 million between 2015 and 2020,” Ms. Fraser says.

The way forward in Africa
Meanwhile, Ms. Diop is urging countries to create national action plans on implementing 1325. “So far only 16 countries have action plans. Where are the rest?” she asks, adding that monitoring of and reporting on the implementation of the resolution was also not systematic. She emphasizes the need to regularly remind countries of their commitments and accountability.

African countries can also look into information sharing and documenting good practices, regional training, as well as monitoring and reporting on progress in the implementation of the resolution.