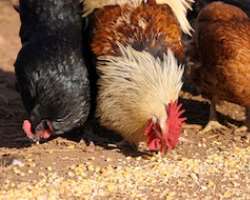 Adamawa Government has disposed over 24,000 birds following an outbreak of Avian Influenza in the state.

Malam Isa Salihu, state commissioner for Livestock Production while Speaking shortly after the disposal of the birds at Adda Rog poultry farm in Toungo Local Government Area said Federal and State governments had taken precaution measures to curtail spread of the disease.

Salihu said that all affected poultry farms in the area were quarantine including the farm workers.

“We thank God for quick intervention to contain the disease from spreading to other poultry farms in the area.

“Already the state government has massively embarked on sensitization campaign for people to avoid having contact with death or eating unhealthy birds.” Salihu warned.

He said that the state government had embarked on massive movement restriction of birds,eggs and other related animals to control the disease.

Malam Muhammed Hassan, 62, the Poultry Farm Manager of Adda-Rogo in Toungo Local Government Area of Adamawa, where Birds Flu outbreak was confirmed said that over 24,000 birds, 250 peacocks, and 456 Guinea Fowls and 54 Turkeys died and disposed.