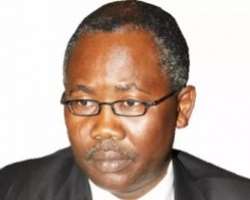 There are indications that the Federal Government has concluded plans to declare some top officials of the Goodluck Jonathan administration wanted, in connection with several ongoing corruption investigations.

The list according to top security sources has been compiled and would be released next week.

Top on the list of those suspected to be declared wanted is a former Minister of Justice and Attorney General of the Federation, Mohammed Bello Adoke. According to reliable sources, Mr. Adoke is being wanted in connection with the $1.1 billion Malabu Oil deal.

Also believed to be on the list is the publisher of ThisDay Newspaper, Nduka Obaigbena. He would be declared wanted for receiving N670 million from former National Security Adviser, Sambo Dasuki.

The whereabouts of Mr. Obaigbena is not certain, but operatives could arrest him as soon as his name is published, and be extradited to Nigeria to face trial.

Others on the list are the former Comptroller of the Nigerian Customs Service, Abdullahi Dikko, who is being investigated for fraud, and a former chairman of the Pension Reform Task Team, Abdulrasheed Maina, who is wanted for allegedly stealing N2.8 billion. Both men are believed to be hiding in Dubai, United Arab Emirate.

The list appears inexhaustible, however, in the coming days will become clearer which President Jonathan’s man that is exempted from the list.