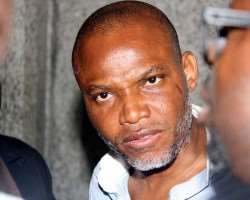 A Federal High Court presided over by Justice James Tsoho on Wednesday remanded the  leader of the Indigenous People of Biafra, Nnamdi Kanu, in  Kuje prison.

Kanu had been in the custody of the Department of State Services since he was arrested last October for allegedly plotting against the Federal Government. .

Justice Tsoho made the order following a request by Kanu's counsel, Chief Chuks Muomah, that his client be transferred to prison.

According to Muomah, Kanu has remained incommunicado since he was arrested by the DSS.

Kanu ran an underground radio pushing for the creation of an independent state of Biafra.

Wednesday's ruling was the first time a court would order his remand.

A previous court order ordering the release of Kanu, whose arrest and detention by the DSS has spawned huge protests in major towns of Southeast and some parts of Southsouth, was disobeyed by the  federal government.

President Muhammadu Buhari during a televised interview by senior editors on major networks in Nigeria on December 30, 2015  justified his administration's action, saying it was not reasonable to allow freedom for a person facing the magnitude of allegations bordering on treason  as   Kanu.