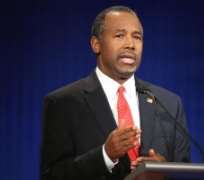 Republican Ben Carson temporarily suspended his US presidential bid Tuesday when four members of his campaign team were involved in a fatal car accident in Iowa, where the first votes in the nomination process will be cast.

A van transporting the group “hit a patch of ice and flipped on its side where it was struck by another vehicle,” Carson’s campaign said in a statement.

A volunteer named as Braden Joplin, 25, died, while three others including a campaign staffer who was driving the vehicle were checked and later released from a hospital.

“I’m suspending all campaign activities today due to a car accident involving members of our team,” Carson said on Twitter.

Carson traveled from South Carolina to Omaha to meet the dead volunteer’s family and released a statement saying it was a privilege to have worked with Joplin.

“One of the precious few joys of campaigning is the privilege of meeting bright young men and women who are so enthusiastic about their country that they will freely give of their time and energy to work on its behalf. America lost one of those bright young men today,” Carson said.

“I had the privilege of knowing Braden Joplin personally, and am filled with a deep and profound sadness at his passing.”

Rivals Marco Rubio, Ted Cruz and Rick Santorum all tweeted their support for Carson’s campaign team after the accident.

Carson, a retired neurosurgeon, is among 12 candidates seeking the Republican presidential nomination in 2016.

Many of them are barnstorming Iowa in harsh winter weather as they seek to secure support in the run-up to the February 1 Iowa caucuses, the first votes in the presidential nomination process.

Carson is running fourth in Iowa, according to a poll average compiled by RealClearPolitics.com.