Olubadan of Ibadan dies at 101 years 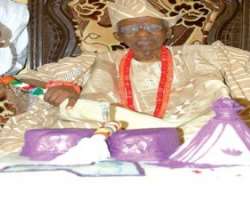 The monarch, reportedly passed away Tuesday evening  at his Monatan residence in Ibadan, Oyo State after he reportedly lost consciousness.

His remains have since been deposited at the University College Hospital (UCH).

The late monarch who was said to have been hale and hearty earlier in the morning passed on peacefully surrounded by his wife and some of his children.

He was the 17th Olubadan since the title was elevated from Baale Ibadan to the Olubadan in 1930.

The first traditional ruler to bear the new title was Oba Okunola Abass who reigned from 1930-1946.

Next in line to the throne is the Balogun of Ibadan land, High Chief Saliu A.O. Adetunji.

The ruler who celebrated his centenary birthday in April 2014, would have been 102 years in three months.

Oba Odulana, according to a highly placed source died of old age.

The royal father who ascended the throne in 2007 after the death of Oba Yunusa Ogundipe, Arapasowu 1 would be remembered as a disciplinarian and a progressive monarch.

The late kabiyesi was a successful and a private individual. He was a teacher, soldier, member of House of Representatives, Parliamentary Secretary to the late Premier of the Western Region, Sir Tafawa Balewa in the first republic and he climbed about 22 steps before he became the Olubadan of Ibadan.

For the Olubadan, it was a long walk to the throne. His first steps to the traditional royal stool were first taken in 1973 when he became the Jagun of Ibadan. Yet, it took him more than 30 years to climb the crucial 22 ladders to become king. He finally became the Olubadan in 2007, at the age of 93. With his advanced age, Oba Odulana is reputed as the oldest person to be crowned Olubadan in recent history.

Odulana was not only a voice of reason for Ibadan and beyond, he was noted for the promotion of education, a bias he held right from his youth. As a politician, Oba Odulana founded the education committee in Ibadan. The Olubadan is a founding member of the Ibadan Progressive Union, IPU. One of the mandates of the union is to scholarship to brilliant but indigent Ibadan indigenes.

Adegoke Adelabu, the late federal minister and member of the Western Region House of Assembly, is said to be a beneficiary of the IPU. The Olubadan was also involved in the establishment of the Igbo-Elerin Grammar School, Ibadan. Oladapo Afolabi, former head of service, is an old boy of the school.

As a monarch, the Olubadan worked to change the status quo in the education sector. When he became, the Olubadan insisted that anybody aspiring to be a mogaji in Ibadan must have a minimum of school certificate. He has also been championing the building of a modern palace in Ibadan.

Odulana, a first class chief, was an accomplished professional. The Olubadan brought years of experience, professionalism and uncommon goodwill to the throne. As a soldier, he fought in the Second World War among others, defending Britain. He was also a former minister of state for labour who discharged his duties to the best of his abilities. However, not many people know that the Olubadan was an amateur boxer and used to spar with friends. The monarch is reputed to be a stickler for discipline and excellence.

He once had a running battle with the now late strongman of Ibadan politics, Chief Lamidi Adedibu , who was Ekarun Olubadan, a member of the Olubadan-in-council.

He threatened to sanction any erring chief in line with laid down Ibadan traditional and conventional regulations.

This led to an open confrontation between the monarch and the late Adedibu .

Also recently, the late Oba Odulana had a disagreement with Governor Abiola Ajimobi on the elevation of some high chiefs following the demise of the Otun Olubadan and Balogun Olubadan.

It took the intervention of Ibadan Elders to resolve the conflict.

The late Olubadan on August 17, 2007, ascended the throne with a clear vision to restore the dignity and aspiration of the people of Ibadan in their transition from a warrior dissident people to the promise of intellectual beacon that the city has evolved to become in modern times.

It was with pomp and celebration that all Ibadans proudly welcomed the coronation of the 93-year-old Oba Samuel Odulana, Odugade 1 as the 40th Olubadan of Ibadanland.

He was a man of honour and integrity, who came to demonstrate the time-honored trait of the Yoruba good breeding, the Omoluabi. When Kabiyesi mounted the throne in 2007, Ibadan, the political capital of the Yoruba, was in the throes of conservative political forces.

The drums were rolled out in April 2014 to celebrate the centenary birthday of the late Olubadan, the man who set a new record in the history of Ibadan. Since the ancient city started the monarchical system in 1820 with Baale Maye Okunade as the first king, Odulana was the first king to attain the age of 100 years on the throne.

Others who reigned before him were actually old due to the well-arranged traditional structure that is adjudged the best in the South-west. This orderly arranged ascendancy to the throne of the Olubadan makes Ibadan unique in Yorubaland.

Unlike other cities in the zone where crowning of kings is preceded by fierce battles by contenders, Ibadan is not known for such. There are two lines to the throne of the Olubadan: civil and military, which is translated to Egbe Agba and Balogun.

Titleholders are appointed on rotational basis to occupy the stool immediately a king passes on.