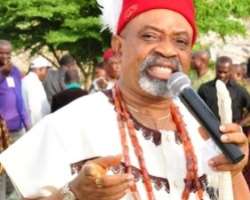 The serene atmospherics of the sub-urban town of Alor, Anambra State will be the outpouring of top government officials and political heavyweights as the Minister of labour and Productivity, Dr. Chris Ngige, bury his father on Saturday.

Nigige is almost a cult personality in his native Anambra State, where he was governor for close to four years before the Supreme Court asked him to vacate his seat for former Governor Peter Obi.

President Muhammadu Buhari, his vice, Professor Yemi Osinbajo, Senate president, Bukola Saraki and the Speaker of the House of Representatives, Aminu Dogara, are among very important personalities to grace the burial of the late Pa Pius Ngige. Others expected at the ceremony include the five state governors in the South East zone and some of their colleagues from other parts of the country, as well as ministers and members of the national and state assemblies.

Pa Ngige passed on last month at the age of 105 years.

It will be President Buhari's first visit to Anambra State since winning the election.

Senator Ngige told reporters at his Alor, Idemili South Local Government Area that the Federal Government delegation to the ceremony would be led by the Secretary to the Government of the Federation, SGF, Babachir David Lawal, while governor of Anambra State, Chief Willie Obiano would be the chief host.

Various committees for the burial have started turning in their reports, while work on car parks in Alor were being rounded off, weekend.

According to Senator Ngige.  though he was not a politician, he supported good governance and would do everything possible to encourage those who serve the society well.

He said, “My father admired the late Chief Obafemi Awolowo because of his free education policy. When I was governor, he supported all my political battles because of his belief that a coward dies before his death. He was my friend because we did things together and though he was not highly educated, he ensured that all his children acquired Western education.