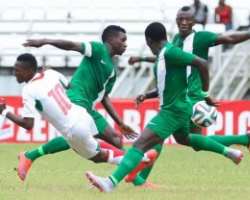 Nigeria began their 2016 African Nations Championship on a brilliant note by defeating Niger Republic 4-1 in Kigali on Monday evening.

A treble from substitute Chisom Chikatara plus Osas Okoro's goal were all Sunday Oliseh's men needed to power past François Zahoui's side who got their consolation courtesy Victorien Adebayor at the Stade Régional Nyamirambo, Kigali.

After a scoreless first half, both teams came out strong in the last 45 minutes with five well taken goals in the highly entertaining encounter.

The Super Eagles dominated possession from kick off but failed try any attempt at goalkeeper  Alhassane Alzouma Moussa, with Prince Aggreh occasionally caught in the Mena's offside trap.

Coach Oliseh was forced to make an early change when he replaced Alimi Jamiu, who had been cautioned by the referee with Kalu Okogbue.

After 31 minutes, Tunde Adeniji had a chance to put Nigeria ahead but his attempt went wide. On the stroke of half time, Shefu Musa forced Ezenwa to another cool catch.

On resumption of the second half, Okoro gave his side the lead after a fine pass from Adeniji inside the Menas' penalty area. The Enugu Rangers man wasted no time before placing the ball in the far right of the post that gave goalkeeper Moussa no chance.

This awakened Zahoui's side who attacked the Nigerian backline in their number in search of an equalizer. Chikatara who replaced misfiring Adeniji doubled the lead with Okoro providing the assist.

And while it seems Oliseh's side were home and dry with ten minutes left in the game,Adebayor gave his team a lifeline with a volley that left goalkeeper Ezenwa stunned, but two more goals from Abia Warrior's Chikatara gave the Super Eagles a convincing win in Kigali.

With this result, Nigeria top Group C with three points and will face Tunisia who were forced to a 2-2 draw by Guinea on Friday.