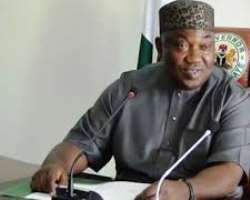 Governor Ifeanyi Ugwuanyi of Enugu State has called on contractors handling various road projects in the state to re-double their efforts to ensure that they deliver quality jobs within the stipulated contract period, stressing that his administration was in a hurry to complete all ongoing projects for the overall  benefit of the people.

Gov. Ugwuanyi who spoke through the Chairman of the newly constituted  Enugu State Urban Renewal Committee, Arc Chris Offor, during the committee’s site inspection visits to Enugu East, Udi, Nsukka,  and Udenu Local Government Areas, at the weekend, frowned at the low pace of work in some of the sites after they have been fully mobilized and told the contractors that the State Government will not tolerate any form of laxity that could undermine it’s estimated time lag for the completion of the projects.

Arc. Offor assured the construction companies of government's cooperation to succeed, adding that inspite of the economic challenges and the huge debt the present administration inherited, which have drastically affected the revenue of the state, Governor Ugwuanyi is determined and committed  to his administration's development agenda aimed at alleviating the suffering of the people.

While commending the governor for his untiring efforts to ensure that development reaches all the nooks and crannies of the state, the chairman of the committee told the contractors that their visit  was necessitated by the desire of the government to ascertain their constraints and ensure that quality jobs are executed within the time frame agreed upon.