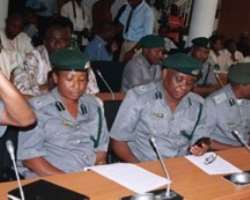 The Comptroller-General of the Nigeria Customs Service, Col. Hammed Ali (retd.), said on Friday that all officers and men of the customs had been mandated to make full disclosures of their assets.

He said the directive was a new measure put in place to install transparency and compliance with the rule of law in the organisation.

The directive on assets declaration was contained in a circular signed by the Comptroller-General and addressed to all Deputy Comptrollers-General, Zonal Coordinators and Customs Area Controllers, which mandates all officers to comply with the directive within 14 days.

According to the circular, which was published on the customs' website by its Public Relations Officer, Wale Adeniyi, the directive on assets declaration “is in compliance with the Bank Employees Declaration of Assets Act Cap B1 Laws of the Federation of Nigeria, 2004. Though the Act provides for assets declaration by all bank employees, it also empowers the President to extend its application to other categories of persons.”

The Comptroller-General, who observed that many officers of the customs had not complied with the provisions of the Act over the years, stated that the 14-day ultimatum for compliance would be strictly enforced. PUNCH