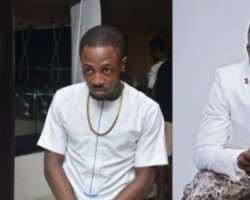 Now in the Nigerian entertainment industry especially music, it the year 2016, is rather starting in an ugly note with tongue lashing among some colleagues in the industry.

First day of the New Year, the misunderstanding started between singer, Olamide and Don Jazzy, then proceeded to Davido, his baby Mama, Sophia and Dele Momodu. Then recently the switch of fight turned to Wizkid and Dammy Krane and while many hope they settle, the table has turned to music producer, Shizzi and singer Tunde Ednut.

According to Net, Oluwaseyi Akerele better known as Shizzi, is not very happy after he discovered that the beat he made for singer, Wande Coal some time ago, got stolen by Tunde Ednut which he used for his latest single, 'Kosowo.'

Shizzi, is said to have set his legal team in motion to deal with the situation as fellow music producer Masterkraft, has also been involved in the case with an order that the music which has been uploaded on some music sites be brought down immediately.