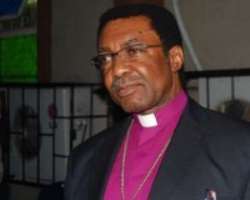 The Arch- Bishop, Enugu Ecclesiastical Province, Most. Rev. Emmanuel Chukwuma, has joined the growing voice of reason and circumspection  over the festeringagitation for Biafra . While condemning the pro-Biafra who are stoking the fire of agitations, the respected cleric described their activities as   as misguided. The arrest and detention of the founder of Radio Biafra, Nnamdi Kanu, has led to protests by pro-Biafra agitators (the Movement for the Actualization of Sovereign State of Biafra, MASSOB, and IPOB)which have caused ripples across the land and re-awaken moribund agitation of the creation of independent state of Biafra.

Chukwuma, who spoke at a press conference in Enugu,   said that the agitators did not experience the Nigeria's civil war and therefore properly appreciate the huge tolls it took on the people of the East. He said that the Igbos  were yet to recover from the effects of the war.

In trying to situate the agitations in context, Chukwuma said  the protests by the youths were borne out of frustration occasioned by abysmal infrastructure decay in the South-East geopolitical zone that led to many ideal hands in the region.

He said, “Our people have invested in other parts of Nigeria. The agitation for Biafra is a grievance being shown in a wrong way because of frustration. The youths are frustrated because many of them have been used and dumped by politicians. Most of these politicians have failed them. The appointment of an Igbo in President Buhari's cabinet does not translate to infrastructure development.

“All that we need now is the empowerment of our youths. Federal Government should ensure constant  power supply so that industries will be established to create jobs to curb restiveness. An idle man is the devil's workshop. The Igbo is in support of the President's anti-corruption fight. The people who have stolen our wealth should be brought to book and the funds recovered plunged in the development of our area.”

“We are aggrieved over the state of our roads. There is no federal presence in the South-East. Our prisons are congested among others. Although we did not vote for Buhari, we now know where his administration is going and we have embraced it.Buhari should temper justice with mercy over Biafra agitation and release Nnamdi Kanu unconditionally.” “the Arch Bishop appealed.