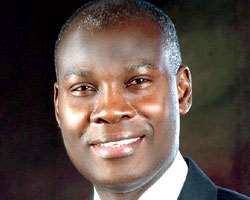 The court officials as early as 8.00 a.m., had stormed the four branches of the bank when they were set to be receiving customers, thus preventing transactions and other activities.

Meanwhile, the bank has described as an abuse of the judicial process the action of Tuns Farms Limited, which, according to it, acted illegally by disrupting its operations despite a notice of appeal and stay of execution order filed by the bank against an Osogbo High Court judgment in favour of the customer.

According to a statement issued by the bank, Tuns Farm abused the judicial process by approaching the same court whose judgment had been appealed for an enforcement order on the bank. Curiously, the bank said the High Court granted the plaintiff's request when it no longer had jurisdiction on the matter.

It said that both the stay of execution order and notice of appeal were duly served on the plaintiff.

The bank said the case was on appeal at the Supreme Court and another at the Court of Appeal with both parties waiting for a date to argue their cases.

The bank reassured its customers that normal services would reopen at its three branches invaded in Osogbo by the plaintiff and his agents tomorrow, and commended them for being loyal to the bank.

Customers, who came to the banks to transact business, were caught unawares. They were forced to return home after the reality had dawned on them.

The presence of armed security men around the branches of the bank while the exercise was going on drew the attention of passersby and traders in the neighbourhood.

All members of staff were sent out from the banks' premises while computers air-conditioners, cars, generators and other movable items belonging to the bank were moved away.

In addition, electricity supply to the bank offices was also disconnected by the court officials.

A Honda Accord with registration number Lagos KTU 373 AY, belonging to the Regional Manager of the bank at Fagbewesa Street, Osogbo, was also towed away.

While pleading for mercy, the Regional Manager, who was visibly disturbed by the development, said his second car at the Alekuwodo branch had been towed away, urging the court officials to leave one for him to enable him move around.

Meanwhile, The Guardian learnt that the bank had entered into an agreement with Tuns Farms Limited in 2005 when the bank offered a credit facility of N414,000,000 to the firm and the money was accepted to develop the Abuja property projected to earn the firm a net income of N1.152 billion.

It was gathered that Skye Bank turned around and released only N150 million, thus frustrating the company's project and caused damages for huge loss of investment.

According to the judgment signed on January 12, 2016 and obtained by The Guardian, the court is to seize any money, bank notes, cheques, bills of exchange, promissory notes, bonds or securities for money found within the Osogbo Judicial Division of the bank.

Also, in a certified true copy of judgment delivered by Justice A. O. Ogunlade on March 14, 2014, the court held that: “I am convinced by overwhelming evidence laid before me that the defendant (Skye Bank) breached the fundamental terms of the contract in facility 11 of Exhibit PA1 without lawful justification and I hereby make an award of special damage in full to the claimant in the sum of N421,384,000, being the loss the claimant suffered due to the refusal and failure of the defendant to comply with the terms and conditions of the contract of August 17, 2005.

Also, in the appeal filed by Skye Bank against Tuns International Holdings Ltd and Tuns Properties Ltd, dated May 8, 2015, Justice Mohammed Danjuma of the Court of Appeal held that the appeal lacked merit and is 'hereby dismissed.'

The court held that “judgment of the High Court of Osun State delivered by Justice Aderibigbe is hereby affirmed.”

Counsel to Tuns Farms, Duro Adeyele (SAN) while responding to enquiries, said since the court delivered judgment in favour of the claimant, the management of the bank refused to do the needful.

He said the court judgment was not limited to Osogbo branches alone, saying the action can be extended to other branches in the federation to enable the claimant recover the cost involved.

He said: “There is no inhibiting factor restraining us from carrying out the court judgment.”

However, the image-maker of the bank, Mr. Rasheed Bolarinwa, said there was a subsisting court stay of execution order obtained by the bank from the court of law, alleging the action of Tuns Farms was illegal.