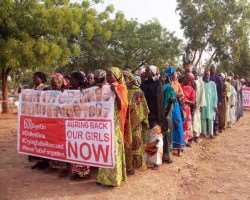 Members of the “Bring Back Our Girls” movement and mothers of the missing schoolgirls march on January 14, 2016 in Abuja (AFP Photo/)

President Muhammadu Buhari said Thursday that the administration would soon set a panel investigate the  “ the theft of the 219 girls from Government Secondary in Chibok, Borno State.”

The panel to investigate the incident which happened in April 2014 is soon to be named by the National Security Adviser, NSA, General Babagana Munguno, Presidential spokesman, Mallam Garba Shehu, said in a statement.

The crux of the  investigation is,  among other things, unraveling  the remote and immediate circumstances leading the kidnap of the girls by Boko Haram terrorists as well the other  events, actions and in-actions that followed the incident.

About 300 parents and sympathisers, many of them crying, had earlier marched through Abuja carrying signs with the faces of the missing girls before being taken in buses for an audience with Buhari at his official residence.

It was the first time the BringBackOurGirls protest group had met Buhari since he declared in December that the extremists were “technically” defeated, despite warnings from security analysts the war was far from over.

The president at the meeting,  in Abuja, assured parents of the Chibok girls that  he has been doing his best and will continue to do everything possible to ​ rescue them and re-unite them with their families. It was attended by some parents of the abducted girls, representatives of the Chibok community and members of the Bring Back Our Girls movement at the Conference Hall of the State House

Buhari said, “I assure you that I go to bed and wake up every day with  the Chibok girls on my mind.

“The unfortunate incident happened before this government came into being.

“What have we done since we assumed office? We re-organized the military, removed all the service chiefs and ordered the succeeding service chiefs to deal decisively with the Boko Haram insurgency.

“In spite of the terrible economic condition we found ourselves in, we tried to get some resources to give to the military to reorganize and  equip, retrain, deploy more troops and move more forcefully against Boko Haram.

“And you all know the progress we have made. When we came in Boko Haram was in Adamawa, Yobe and Borno. Boko Haram has now been reduced to areas around Lake Chad.

“Securing the Chibok girls is my responsibility. The service chiefs and heads of our security agencies will tell you that in spite of the dire financial straits that we  found the country in, I continue to do my best to support their efforts in that regard.

“This is a Nigeria where we were exporting average of two million barrels per day at over 140 dollars per barrel. Now it is down to about 27 to 30 dollars.

“God knows I have done my best and I will continue to do my best,” President Buhari said.

In his remarks, the Chief of Defence staff told the meeting that in the last three months the military has liberated more than 3000 people kidnapped by Boko Haram in the North eastern part of the country.

He said that the military had the ability to  rescue the Chibok girls, but added that “intelligence is delicate and we don't want to do ​ anything to jeopardize the lives of the girls.”

Since 2009, at least 17,000 people have been killed in Boko Haram violence and some 2.6 million forced from their homes.

The BringBackOurGirls group has kept up the pressure on the government with regular demonstrations and vigils in the capital.

But former education minister Oby Ezekwesili, who leads the BringBackOurGirls group, said Buhari had told them there was no “reliable intelligence that would enable them to rescue the girls as immediately as we are demanding”.

Buhari said last month he was prepared to negotiate with any “credible” Boko Haram leaders for the girls’ release.