Crack In Adamawa APC Over Removal Of Party Chairman 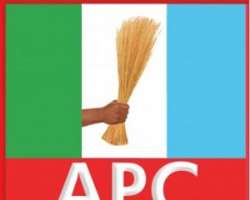 There is brewing tension in Adamawa All Progressives Congress (APC) over removal of the party acting chairman, Alhaji Shuaibu Yamusa who was replaced by Mr Ezra Dimas.

Yamusa was removed following a vote of no confidence passed on him by the party executive few days after the three APC senators from the state paid him a solidarity visit, a development many observers said did not go down well with Gov Muhammadu Umaru Jibrilla Bindow.

The emergence of Dimas believed to be Gov Bindow favorite as the acting chairman was viewed as an attempt by the governor to hijacked the party structure ahead of 2019 and shut out any influence from the three senators and other Abuja based politicians who may be nursing 2019 ambition.

However, an emergency stakeholders meeting over the weekend chaired by Senator Ahmed Abubakar Mu'Allahyidi of Adamawa South Senatorial District, resolved that the said the purported removal of Yamusa was unconstitutional and therefore remain null and void.

According to the stakeholders, the said meeting where Yamusa was removed was summoned secretly by Abdullahi Bakare, the Principal Personal Assistant to the governor, was illegal and in contradiction of Article 17. Sub section (iv v) of APC constitution.

The party's stakeholders called on the national leadership of the party to save the party from illegality.

" We were surprised when we learnt that the Principal Assistance to Governor Bindow summoned an APC state exco meeting where the party acting chairman was purportedly removed.", Mu'Allayidi lamented.

Meanwhile, an APC stakeholder in the state, Alh. Uba Dan Arewa has warned against factionalizing the party in the state pointing out that most of them left PDP to APC in the state because of such factional crisis.

Dan Arewa sue for maturity and peaceful resolution of the brewing internal crisis.

Feelers revealed that the brewing crisis between the home based politicians and their Abuja counterpart has taken a new dimension as an empowerment programme organized in Mubi by Senator Binta Masi Garba was frustrated from holding by some youths alleged to be loyal to the governor who were angry with her " for fighting the governor."

"Senator Binta is having problem because she abandoned her people many months after election. They just protested to register their disappointment", said Buba Jatau, a resident of Mubi.

However, a supporter of Binta, Baba Abdullahi, insisted that government was involve in harassing the senator.

"She was denied venue by the local government to host her empowerment programme for youths and widows! Why denied her venue if not orders from above?" Abdullahi queried.