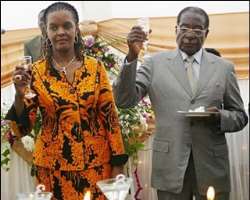 The Zimbabwe government on Thursday denied reports that veteran President Robert Mugabe, 91, had collapsed and died in Singapore after rumours spread rapidly about his alleged ill health.

Under the headline 'President well, fine', the state-run Herald newspaper said stories about Mugabe's health emerged each year when he took his annual leave outside the country.

'You cannot doubt that there will be a story on the President's alleged death every January,' presidential spokesman George Charamba told the paper. Charamba blamed the ZimEye news website for starting the rumours. 'This is the way the website seeks to improve its hits in order to get dirty money… There is a financial incentive to the grim lie,' he added.

The Herald said that Mugabe was in the 'Far East' but did not specify which country. The president, who is the world's oldest national leader, has ruled Zimbabwe since independence in 1980. Despite his age, he continues to give long speeches in public, but speculation over his health mounted last year when he tripped and fell down some steps at a televised ceremony.

He also read a speech to parliament in September apparently unaware that he had delivered the same address a month earlier. WikiLeaks in 2011 released a 2008 US diplomatic cable saying that Mugabe was reported to have prostate cancer and had less than five years to live. His regime is accused of systematic human rights abuses and overseeing Zimbabwe's dire economic decline.

The ruling ZANU-PF party has been riven by factionalism for years with Mugabe avoiding naming a successor. Senior Vice President Emmerson Mnangagwa is seen as one front-runner to be the next president.