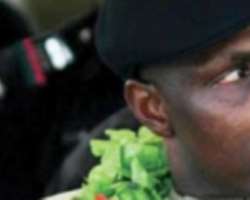 The  Court had  ordered Tompolo to appear before it  to face a 40-count charge of alleged N13bn fraud levelled against him by the Economic and Financial Crimes Commission, which the former Niger Delta militant had shunned.

It was on this premise, that court presided over by Justice Ibrahim Buba  issued a bench warrant on Tompolo and ordered the police to produce him in court by all means.

Justice Buba also granted leave to the EFCC to serve Tompolo the summons and charge number FHC/L/553/2015 through substituted mean, by “affixing same on the conspicuous part of his known address situated at 1 Chief Agbanu DDPA Extension Warri, Dalton State”.

The judge issued the summons following an application filed by the EFCC through its lawyer, Rotimi Oyedipo, alleging that they not been able to serve his with a copy of the charge.

All his co-accused, including a former director-general of the Nigerian Maritime Administration and Safety Agency, Patrick Akpobolokemi, were present in court.

Tompolo is being arraigned in connection with a multi-billion naira fraud involving a land deal with the Federal government.

The anti-graft commission also stated that they were forced to secure a court order because Tompolo has continuously evaded their efforts to speak to him about his involvement in these allegations.

However, former Niger Delta militant leader while reacting to the invitations yesterday, January, 13, has said that he didn't receive any summons.

Tompolo insisted that the land sale was transparently done and that any question for clarification should be directed to former President Goodluck Jonathan.