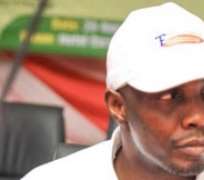 Buba gave the arrest order after an application filed before the court by the EFCC prosecutor,Mr Festus Keyamo,for failure of the accused former militant to appear in court to answer charges filed against him

Mr Keyamo told the court that based on the order of the court for substituted service, summons to appear before the court was pasted at his residence in Warri Delta state yesterday and photographs of it were taken.

Mr Keyamo also told the court that a copy of the photograph accompanied with the affidavit was being filed at the court registry.

He therefore urged the court to stand down the case for fifteen minutes.

But as the presiding Judge, Ibrahim Buba was about to accede to his request, one of the officials of the court registry brought the sworn affidavit to the court.

It was alleged that during investigation and up till the criminal charge against him was filed before the court, Ekpemupolo has rebuffed all invitations sent to him, including the court summons to appear before the court. Instead, he took a paid advertisement in newspaper warning on the consequences of him going to war.

Nigeria's anti graft agency, the Economic and Financial Crimes Commission(EFCC) in a 40-count criminal charge of unlawful conversion filed against him and former NIMASA boss Patrick Akpobolokemi alleged they converted the sum of $108.7 million and N2.1 billion, property of the Nigerian Maritime Administration and Safety Agency, knowing that the said sum were proceeds of theft.

Three other persons and five limited liability companies were charged with them.

In count seventeen to count thirty-Eight of the criminal charge,Rex Elem,Gregory Mbonu and Destre consult Ltd were alleged to have converted,the sum of $106.9 million, property of Global West Vessel Specialist Ltd, knowing that the sum was derived from official corruption.

In counts 39 and 40,Captain Warredi Enisuoh was alleged to have converted the sum of eight million Naira, property of Global West Vessel Specialist knowing that the money was derived from official corruption.

The offences alleged to have been committed by all the accused are punishable under money laundering Act of 2012.

All the accused persons and the companies alleged to have been used as conduit pipes for the conversion of the money were present in court today with the exception of Government Ekpmupolo who the court has ordered to be arrested.

Justice Buba has adjourned till 8th of February, 2016 when all the accused will be arraigned.