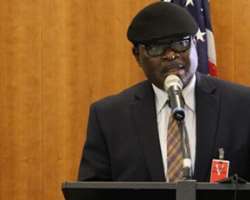 As complaints mount against the Economic and Financial Crimes Commission (EFCC) over human rights violations, the Chief Judge of the Federal Capital Territory (FCT), Justice Ishaq Bello, has ordered magistrates in the FCT to stop granting remand orders to the anti-graft agency with immediate effect.

Justice Bello gave the directive Wednesday during a visit to the Keffi Medium Prison in Keffi, Nasarawa State.

The EFCC has been securing warrants from magistrates in Abuja to detain people without arraignment beyond the maximum 48 hours allowed by the constitution.

By so doing, the commission relied on FCT magistrates for remand warrants to detain suspects being investigated for corruption and other economic crimes, especially those linked to the misappropriation of funds from the Office of the National Security Adviser (ONSA) under the past administration.

The commission last week said it had obtained a detention warrant from a Magistrates' Court in the FCT to enable it keep the National Publicity Secretary of the Peoples Democratic Party (PDP), Mr. Olisa Metuh, in its custody pending the conclusion of its investigation.

The chief judge, who also expressed concern over the high number of inmates awaiting trial in the prison, also barred Magistrates' Courts from entertaining cases like armed robbery and murder over which they ordinarily lack the jurisdiction to try.

'Let me also use this opportunity to say this: I understand that EFCC has been bringing some cases to you and you have been granting them remand orders. You must no longer do this from today.

'You must not arraign people for offences such as armed robbery, murder and other capital offences before Magistrates' Courts which you don't have the competence to handle.

'On no account should you take cognisance of cases outside your jurisdiction and which you do not have power to try.

'You must henceforth decline jurisdiction on such cases. You must not do this as from today,' Justice Bello said.

He directed the magistrates, prison authorities and the FCT High Court Deputy Chief Registrar, Mr. Sunday Ochimana, to compile all such cases currently before Magistrates' Court in the FCT for him to re-assign to the High Court, which has the jurisdiction to try them.

The judge's position was made known when reviewing cases of some inmates awaiting trial in the prison. He discovered that some of them were charged before Magistrates' Courts for capital offences.

One of such cases was that of Queen Usa, charged with conspiracy and armed robbery.

Justice Bello directed that the case be transferred from the Magistrates' Court it is currently in to Court 18 of the High Court of FCT.

Despite his position on the remand of suspects, Section 293 of the Administration of Criminal Justice (ACJ) Act allows magistrates to remand suspects on a holding charge for a maximum of two weeks in situations where the prosecution needs time to tidy up its case.

The chief judge, who along with his entourage, reviewed about 322 criminal cases involving suspects sent to the prison by FCT courts, and freed five awaiting trial inmates on the grounds that they were being held unjustly.

Those in Justice Bello's entourage to the prison were judges, magistrates and top officials of the FCT judiciary as well as prosecutors in the Federal Ministry of Justice led by the Director of Public Prosecution, Mr. Mohammed Diri, and prosecutors from the Legal Department of the Nigeria Police Force.

One of those freed was 20-year-old Precious Ugwu who was arrested by the FCT Environmental Task Force around 10 pm on December 14, 2015 at the Durumi area of Abuja on allegations that she constituted a 'public nuisance' by being outside her house around that time.

The chief judge held that the offence for which she was charged was unknown to law and that there was no reason to keep her in prison.

'You are not supposed to be here. Those at the Environmental Task Force should be able to fashion out a most civilised way of going about their duties. You are free to go,' the chief judge told an elated Precious who on hearing the judge's pronouncement jumped up from where she was sitting and thanked the judge.

'I sell cooked Indomie (noodles) close to a bar at Durumi. I was in my place of business around 10 pm on December 14 when the task force men came. They said our area was notorious for criminal activities and queried why I did not close before that time.

Earlier, the Deputy Controller of Prisons at the Keffi Medium Prison, Mr. James Lander, said the prison, with a capacity for 160, currently houses 540 inmates, 415 of whom are awaiting trial inmates.

He said of the 415 awaiting trial, 301 were sent to the prison on remand by FCT courts due to congestion at Kuje Prison in Abuja.

Lander, who highlighted the prison's many challenges, disclosed that the facility currently has a functional mini Black Maria (prison van), with which it conveys prisoners to 80 courts spread across five local government areas in Nasarawa State and the FCT on a daily basis.

He appealed to the FCT Minister, Mr. Mohammed Bello, and the FCT judiciary to assist his prison in addressing some of the challenges, particularly in the area of transportation to ease the conveyance of inmates to courts.

Meanwhile, the EFCC has finalised plans to arraign the National Publicity Secretary of the PDP today after keeping him for more than one week in its custody.

THISDAY gathered wednesday that Metuh, who was picked up at his Abuja residence on January 5, will be arraigned before Justice Okon Abang of the Federal High Court (FHC), Abuja.

The PDP spokesman was arrested by the EFCC for allegedly collecting N400 million from the former National Security Adviser (NSA), Col. Sambo Dasuki (rtd), a charge he has denied.

Metuh, before his arrest, had confirmed that he collected an undisclosed sum of money from former President Goodluck Jonathan in order to carry out some assignments as the spokesperson for the then ruling PDP.

Since his arrest, his detention has been challenged by the PDP, which has demanded that he be released or charged to court without delay.

Similarly, the PDP caucus in the House of Representatives on Tuesday issued an ultimatum to the commission to release Metuh from its custody.

Its ultimatum followed a lawsuit instituted by a Lagos lawyer and human rights activist, Mr. Ebun-Olu Adegboruwa, at the Federal High Court in Lagos asking the court to order the immediate release of Metuh from EFCC custody. – Thisday.