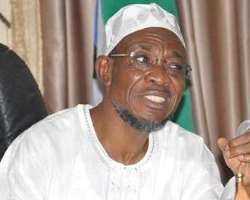 The Osun State government has advertised vacancies at hospitals in the state, a move apparently aimed at getting replacement for doctors, who are currently on strike.

The advertisement, which was signed by Sunday Olajide on behalf of the Head of Service, Mr. Sunday Owoeye, was aired on the Osun State Broadcasting Corporation.

The broadcast led many to conclude that Governor  Rauf Aegbesola had sacked the striking doctors, who went on strike since since September 28, 2015.

The  state government had threatened to fire the doctors if they failed to resume work on Friday.

The governor said on Thursday that the civil service rule to effect that would be implemented on Monday but that did not happen.

The President of the Association of Resident Doctors, LAUTECH, Dr. Adeyinka Owolabi, when contacted told our correspondent on the telephone that he also listened to the advert.

He said, 'We are still on strike. Nothing has changed but I heard on the television- government advertising vacancies of doctors. They are promising them the stipends that we are rejecting.

'We have approached the court before this and we are  waiting for the date of the hearing of the matter.'

The doctors rejected half salaries which the state government is paying and embarked on the strike after their ultimatum.

Meanwhile, the Medical and Dental Consultants' Association of Nigeria at LAUTECH Teaching Hospital have embarked on an indefinite strike following the expiration of a seven day ultimatum given the government.

The Secretary of MDCAN, Dr. Tokunbo Olajumoke, confirmed this to our correspondent on the telephone.

He said, 'The strike started 8am this morning at the expiration of the ultimatum. So we are on strike.'