Agbo resumes as LG Chairman, to prioritize security, social welfare, others in Igbo-Etiti 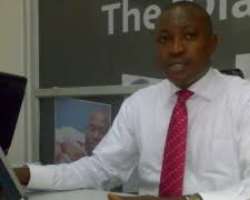 The new Caretaker Committee Chairman of Igbo Etiti Local Government Area of Enugu State, Mr. Malachy Agbo, has pledged to make security of lives and property one of his priorities.

He said this during his courtesy visits to the Divisional Police Officer (DPO) of Igbo Etiti Local Government, Mr Ifeanyi Nwoye, at the Divisional Headquarters, Ogbede; and His Royal Highness, Igwe Michael Odo, the Igwe of Ojime Ukehe Autonomous Community, who was also the Chairman of Igbo Etiti Traditional Rulers Council, at his Palace on Monday.

The Chairman who was accompanied by his Deputy, Hon. Patrick Nwodo, some senior members of staff of the council and a few personal aides, while expressing his appreciation to the police for living up the security challenges of the area, especially during the Christmas season, made it very clear that security was his priority in his approach to improving the welfare of his people.

He noted this was premised on the well-known fact that no area developed without a robust security system that guaranteed the safety of lives and properties of inhabitants. He agreed that while the cost of putting up and sustaining such structures for the area could be enormous, it was always well worth it at the end when people came and went freely and openly went about their lawful businesses.

The DPO, while thanking him for the visit pledged more hard work and commitment from the officers and men of the division in carrying out their jobs as prescribed by the laws of the land. He noted his joy was based on the proactive disposition of the Chairman as was indicated by his uncommon decision to visit him first to rub minds together.

Highlighting some of the challenges they contended with, the DPO noted that while it was always the best to be proactive in law enforcement, fair and fast dispensation of justice rested on the availability of key structures that aided the criminal justice system.

The officer identified the court as one of such and observed it sat in the area only twice in a week with the consequent pressure on the system that sometimes delayed suspects getting needed timely judicial attentions.

On his part, the traditional ruler, Igwe Odo, tasked the Chairman on the promotion of peace and unity among the people especially given the quality human resources in the area in line with its popular reputation as the manpower base of the state.

He was particularly delighted that the Chairman had chosen to interface with the traditional institution this early in his administration, noting they would always be key allies of the government as the chief custodian of the peoples' culture and heritage.

He thus pledged the total support of the traditional institutions of the area whom he claimed despite the very little role they were offered by the constitution, still did much in sustaining development through the enthronement of peace and other positive values in their respective domains.

After the visit, the Chairman also held meetings with different groups of members of staff according to their units and departments; the labour, and other visitors that called on him.

Meanwhile, the local government staff had earlier on his arrival at about 8: 15 am trooped out en mass to receive him with excitement while praying for his success as he piloted the affairs of the council.

Agbo expressed appreciation for their gesture while assuring of his desire to put much smiles on their faces as of every other citizen of the local government area.

He later rounded off the day with a familiarization tour of the council premises, in the company of the workers visiting key offices and units, including the Chairman's lodge where prayers were offered for the success of the administration.