Jonathan must speak on $2.1b arms scandal: PDP 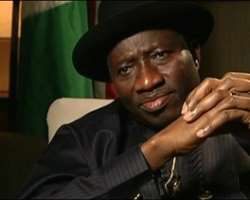 The national leadership of the Peoples Democratic Party has called on former President Goodluck Jonathan to speak out on the controversial $2.1bn meant for the purchase of arms to fight Boko Haram insurgency during his tenure but which was allegedly shared by some influential politicians.

The PDP said the controversy surrounding the sharing of the money by the former National Security Adviser, Col. Sambo Dasuki (retd.), should have attracted the former President's attention by now.

It said the manner in which the money was shared among members of the party and others was disgraceful to the former ruling party.

The Deputy National Publicity Secretary of the PDP, Alhaji Abdulahi Jalo, stated this at a press briefing in Abuja on Monday.

Jalo, who spoke at the party's national headquarters, said the former President should tell Nigerians and the international community whether he authorised the sharing of the money meant to fight insurgency in the North-East in particular and the country as a whole.

He insisted that all those who took part in the sharing of the money should be made to refund it.

He said, “As all of you know, no single kobo can be spent by the Federal Government without an act of the National Assembly.

“Money earmarked for arms purchase, some people diverted it to something else. So many people that you cannot even expect were involved. Now, darkness has come to light.

“Jonathan is alive, he should clarify whether he asked the National Security Adviser to divert money meant to fight Boko Haram into his campaign.

“I'm from the North-East and I know the terrible security situation our people are facing there.

“The money was meant to fight Boko Haram, and we all know that you can't rule without peace. Now darkness has given way for the light.”

Jalo added, “It was not only members of the PDP that shared the money; members of the All Progressives Grand Alliance, Accord Party and the Social Democratic Party, among others, also shared. At least, Chief Olu Falae is not a member of the PDP.

“All of them should return the money. Then, (former) President Jonathan must speak on it. He is still alive.

“Has he ever said anything like this to Dasuki, 'go and take from the money meant for the war against Boko Haram and share for my campaign'? It is time for him to speak up.”

Also mentioned in the scam are ex-PDP National Chairman, Bello Haliru; Abba Mohammed, Sagir Attahiru, serving and former members of the House of Representatives (over N600m); former Chairman of the House of Representatives on Security and Intelligence, Bello Matawalle(N300m); ACACIA Holdings(N600m); and a former Minister of State for Finance, Bashir Yuguda (N1.9bn) among others.

Those who have been linked to collecting cash but are not members of the PDP are a former Governor of Oyo State, Senator Rashidi Ladoja (N100); a former Secretary to the Government of the Federation, Chief Olu Falae (N100); and former presidential adviser, Tanko Yakassai (N63m).

Jalo recalled that the party held a fundraising dinner for the presidential campaign during which more than N20bn was realised, challenging any of the beneficiaries of the money from Dasuki to explain how the party benefitted from such money.

He said, “We are not fools. Money meant for the party's campaign was given to the chairman of our party.

“We had a dinner, where billions of money was realised and this money was for the campaign. We said so and Nigerians were aware.

“We thank God that all those who took money used their private accounts and companies to get that. What has this got to do with the PDP?

“Haliru Bello did a contract with the office of Sambo Dasuki to the tune of N600m with his company's name, not PDP.”

Jalo added, “In the case of Olisa Metuh (National Publicity Secretary of the PDP), his company allegedly had transactions with the Office of National Security Adviser. So, what is PDP's business with that?

“We want those people that have been accused to shed more light, whether they were given the money to campaign for Jonathan.

“Did they bring the money to the party national secretariat? PDP has nothing to do with individuals that used their companies to do contracts with National Security Adviser.

“Those who have been accused to have collected money from the office of the NSA should come and tell Nigerians how they used the money for the party.

“PDP has no company. It is not a private company. It is a political party. Was this money paid into the party account? No. So, these people are 'on their own'.”

Jalo added that all the recipients of the money from the office of the NSA were educated and ought to have asked where the money was coming from.

He said it would be wrong of them to claim ignorance of the source of the money.

He stated, “They know that the money was meant for the purchase of arms; and why didn't they ask him in case they didn't know, 'oga, where is this money coming from?'

“Because of their actions now, people are looking at every member of the PDP as criminals.

“Me, Jalo, I'm not a criminal. I didn't benefit and I didn't ask for any money and I wouldn't have asked for any money from the office of the NSA or anywhere.”

He wondered why some prominent members of the party have remained quiet since the scandal broke out, wondering if they benefitted one way or the other from the looted fund.

Meanwhile, the Democratic Peoples Congress has said it is shell-shocked by the revelation and confession of some public office-holders and their political associates of billions of naira arms funds embezzled and misappropriated during the Jonathan's administration.

It said it was amazed that the $2.1bn appropriated to fight the Boko Haram insurgency in the North-East and other parts of the country, where thousands of soldiers and innocent civilians were killed, wounded and abducted, and millions of people displaced from their homes, could be brazenly looted by eminent public officers and their cronies.

The National Chairman of the party, Mr. Olusegun Peters, who stated this in a statement on Monday in Abuja, argued that there was no moral justification “for the sharing of this blood money by Dasuki and his collaborators.''

Peters added, “Our hearts bleed that eminent Nigerians entrusted with the security and welfare of the citizenry could be so heartless to divert, misappropriate and embezzle $2.1 billion for the procurement of weapons to fight Boko Haram insurgents, when our gallant soldiers protested that they were not well equipped and were Court Marshalled for refusing to fight the insurgents.”

He called on Buhari to dig deeper into the arms deal with a view to identifying and prosecuting the culprits to serve as a deterrent to all those who would attempt such heinous crime against the country in future.

Also the Presidency on Monday said the defection from other political parties to the ruling All Progressives Congress by politicians accused of corruption would not stop them from being investigated and prosecuted.

The Special Adviser to the President on Media and Publicity, Mr. Femi Adesina, said this in an interview with one of our correspondents

Adesina was asked if defection from PDP to the APC was enough to save those already mentioned in the $2.1bn arms scandal from investigation and prosecution.

Nwobodo said he was the Chairman of the Contact Committee of the PDP Presidential Campaign for the South-East, and the only fund received by the committee for its work was N100m from PDP's National Chairman, Dr. Adamu Mu'azu.

Adesina, however, said the present administration's anti-corruption fight would not be based on party affiliation, adding that the President would not encourage any cover-up.

“It is not in the nature of this administration to cover anyone who has questions to answer on corruption, irrespective of party affiliation,” he said.

The presidential spokesman explained that the release of a former military governor of Kaduna State and a chieftain of the APC, Jafaru Isa, by the EFCC had nothing to do with Isa's relationship with the President.

Isa, who was quizzed by the commission, was said to have been released after he refunded N100m of the N170m he allegedly received from the embattled Dasuki.

“The EFCC is in a better position to tell you why Jafaru Isa was released. But it definitely has nothing to do with his relationship with the President. If that were the case, then he would not have been picked in the first place,” he said.