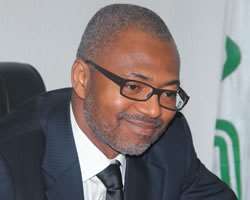 The Economic and Financial Crimes Commission (EFCC) has quizzed the Director General of the National Broadcasting Commission, Mr. Emeka Mba, over his role in the handling of the funds related to the nation's transition to digital broadcasting.

Authoritative sources confirmed that Mba was invited by the anti-graft agency through a letter last week and he honoured the invitation on Monday.

As of the time of filing this report, he had yet to be released thereby fuelling speculation that he might have been detained in the process but the EFCC had yet to confirm whether the NBC boss was being detained or was still going through interrogation.

Some operatives of the EFCC had stormed the NBC last week when they initiated investigation into allegations of diversion and mismanagement of public funds.

There was an indication that Mba might have been invited over some payment into the accounts of some companies that were licensed by the NBC in 2015 to import and manufacture set-top-boxes for the transition to digital broadcasting.

It was learnt that a former Senior Special Assistant to ex-President Goodluck Jonathan had a substantial share in one of the companies that received the payment that had attracted the attention of the EFCC operatives.

When our correspondent visited the NBC on Monday, a senior official of the regulatory agency confirmed the transfer of the money but added that it was only Mba and the Director of Finance that could confirm how much was involved.

The official, however, said it was not only the company linked to the top politician that received the payment but all the 13 companies that were licensed by the NBC to manufacture set-top-boxes in the country.

There was also an indication that the EFCC might have invited Mba over an alleged mismanagement of N34bn which the regulatory agency collected from MTN Nigeria Communications Limited in the controversial sale of broadcast frequency to fund the transition of the country from analogue to digital broadcasting.

When terrestrial television stations move from analogue to digital broadcasting, existing analogue televisions will not be able to receive signals except they connect through set-top-box devices.

Some of the elements of cost which the NBC had sought money for before resorting to selling frequency to MTN include providing subsidy to about 30 per cent of households that own television sets to be able to buy set-top-boxes.

Funds are also required to buy off analogue transmitters from existing broadcast organisations to enable them to invest in what they require to operate in the era of digital broadcasting.

When contacted, the EFCC spokesperson, Wilson Uwujaren, said that he was in Lagos for an official assignment.