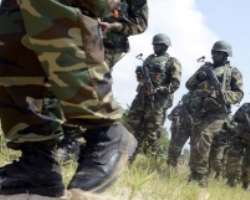 The Deputy Theatre Commander of Operation Lafiya Dole, Maj-Gen. Leo Irabor, has said that all the support needed to win the ongoing war against the Boko Haram terrorist insurgency in the North-East has been provided.

Irabor disclosed this on Sunday, while addressing troops of the 7 Division of Nigerian Army at an event to mark Armed Forces Remembrance Day at St. Bartholomew Military Church, Maimalari Cantonment, Maiduguri.

He said the Federal government and the military hierarchy are right behind all the commanders and soldiers in the battle fields to defeat Boko Haram this year.

'What they (soldiers) can take out from me is an assurance on behalf of Chief of Defense Staff and the Service Chiefs is that the President and Commander in Chief and every Nigerian are solidly behind the soldiers; and victory is assured.'

While promising the families of the fallen heroes of the military supports, Irabor said: 'What better love can anyone give than to lay his or her life down for friends and other relations. I think that they are heroes and they remain heroes.

'For the children they have left behind, of course there will be a responsibility to see and ensure that everything that has to do with education, is taken care off. Their husbands have paid the supreme price for this nation. There is no greater love that anyone can pray than that.'