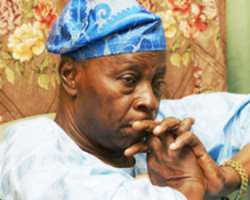 The money was said to have been part of the $2.1bn from the Office of a former National Security Adviser, Col. Sambo Dasuki (retd.), meant for the purchase of arms to fight Boko Haram in the North-East.

The National Publicity Secretary of the SDP, Dr. Abdulahmed Isiaq, at a press conference which he addressed on behalf of Falae in Abuja, explained that the amount was given to him for onward delivery to his party.

The money, he said, was to assist in campaigning and mobilising support for the re-election of ex-President Goodluck Jonathan. He added that the SDP was not paid through the Office of the former NSA.

He therefore asked the Federal Government to hold Anenih and the PDP responsible for the source of the money rather than the SDP.

Falae insisted that the SDP would not return any money to the government coffers, since the money it got was neither from Dasuki nor the ONSA.

He explained that the money was as a result of electoral alliance to which his party entered into with the then ruling PDP, to deliver Jonathan's re-election quest.

The SDP leader said those who were returning money to the government were those who got money directly from the ONSA, adding that he did not get the money from Dasuki or the office he was occupying.

Falae said, 'In terms of refund of money, I want to say here that those people who are refunding money are those who got their money directly from the arms fund. Our funds did not come from the arms deal; our funds came from an electoral alliance with the PDP and we knew that the PDP had a fund-raising committee that gathered billions of naira and the PDP had been in government for 16 years.

'So, with that, we knew that the PDP had the capacity to fund the alliance that was formed with them by the SDP.

'You don't postulate what you don't have on the ground, you can't build on a non-foundation.

'We, as a political party, knew that the PDP was a capable hand in the electoral alliance which we entered into. And we equally knew that the PDP had a fund-raising dinner, where it generated over N20bn. So, whether the money came from Col. Sambo Dasuki or his office, is what we don't know and it is left for them to ask Chief Tony Anenih to explain.

'We knew that the PDP had been ruling Nigeria for 16 years. So, this was the basis for our electoral alliance with them. We can't refund any money to anybody because the money we got as a party came because of the alliance we had with the PDP and we have an agreement note for this alliance.

'If it is possible that the money Chief Anenih gave us was from the arms deal, it is left for them to ask Chief Anenih to clarify. As far as we know, we did not have any dealing with Dasuki. Our office did not ever have anything to do with the office or person of the National Security Adviser, Col. Sambo Dasuki.'

Isiaq explained that prior to the 2015 presidential election, the SDP was approached by the PDP through Anenih, for electoral alliance for the re-election bid of Jonathan.

He said Falae, being the national chairman of the SDP, summoned the National Executive Committee of the SDP to a well-attended meeting to consider the PDP's proposal of electoral alliance for the re-election bid of Jonathan since the SDP did not field a presidential candidate.

He, however, said, his party was in full support of the ongoing fight against corruption, adding that anyone found wanting should be prosecuted according to the laws of the land.

'If you look at the cardinal principles of the SDP, one of the basic one is that of zero tolerance to corruption. So, anywhere there is fight against corruption, the SDP is in support, once it is done according to the ambit of the law.

'In terms of the misappropriation of arms deal fund, as a party, I want to say that anybody who violates the law should face the consequences,' he stated