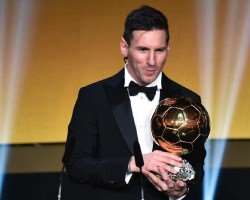 Barcelona and Argentina forward Lionel Messi holds his trophy after receiving the 2015 FIFA Ballon d’Or award for player of the year, in Zurich on January 11, 2016 (AFP Photo/Fabrice Coffrini)

Surely, there’s no debate to be had any longer. Yes, comparing athletes from different eras is usually a fool’s errand. But an honest assessment of things, free of nostalgic or conventional bias, can really only result in one conclusion, can it not?

Lionel Messi is the best soccer player who ever lived.

We knew this before he was awarded his fifth FIFA Ballon d’Or award as the world’s best player of the past year on Monday, in an award ceremony that was typical in its painful awkwardness. By completing his handful of golden balls, interrupted by a brazen two-year run by nemesis Cristiano Ronaldo , Lionel Messi broke the previous record also held by Lionel Messi.

At merely 28 years old and likely still in the midst of his prime, Messi has transcended his sport in a way nobody else ever had before. And long before his body of work is completed, it seems certain now that he’ll be remembered as the greatest of all time.

Let’s consider, after all, the competition.
For some reason, consensus was built over the last few decades that Pelé was the greatest of all time. He did indeed score a grotesque amount of goals over his career – he was credited with 1281, however dubiously, since that number apparently includes exhibition games. That’s more than double Messi’s tally. And he won three World Cups with Brazil in 1958, ’62 and ’70. Messi has yet to win anything major at the senior level with Argentina – although he led the Albiceleste to the 2014 World Cup and 2015 Copa America finals.

But there’s a gaping hole in Pelé’s resume: He never played his club soccer in Europe. His were different times, to be sure. The Brazilian league hadn’t yet been ravaged by the perpetual exodus to Europe by anyone with a modicum of talent. And the South American Copa Libertadores was likewise much more competitive than it is now. Pelé won the former six times and the latter twice.

However, back then just as now, the most competitive soccer was played in Europe. The Brazilian only really appeared at the very highest level once every four years, when the World Cup came around. The rest of the time, he wasn’t facing the world’s strongest teams every few weeks, the way Messi has. The little dribbler has won the Champions League four times and La Liga seven times – and counting. Pelé measured himself against the best every four years; Messi does it every weekend and often on Tuesdays and Wednesdays as well.

Pelé was a precocious prodigy who altered the way both attackers and defenders approached the game, opening their eyes to the possibilities. But Messi has not merely dominated in much the same way, but he also was the central cog in Barcelona ‘s machinery over the last decade, the lynchpin in a team that reinvented the sport entirely. Messi doesn’t just score; he creates. And in so doing he has remade the sport.

Next: Diego Maradona, who has as many things in common with Messi as the two are different. While both are short dribblers from Argentina, Maradona was drug-addled, hedonistic and unmanageable; Messi is the shy and consummate professional who has been with the same woman since he was 20 – whom he has known since they were just five.

Sure, Maradona – an Argentine folk hero; unlike Messi, who left for Barcelona at 13 – also won the World Cup. The thing is, Maradona’s prime was brief. After leaving Boca Juniors for Barcelona in 1982, his time in Catalonia was so tumultuous that the club had no choice but to sell him to Napoli two years later. That’s where he was at his best. But his seventh season was cut short by a 15-month cocaine suspension, ending his time in an adoring Naples and inducing his decline. Which is all to say that Messi has already been better, for longer, than Maradona was.

Our final contestant: Johan Cruyff, the visionary Dutchman who deployed the ground-breaking Total Football scheme devised by Rinus Michels. His stints at Barcelona as both a player and manager laid the groundwork for what the club is today – therefore directly enabling Messi. But if Cruyff scored a lot of goals, won many things and was perhaps the most influential player to ever bestride the soccer field, altering the course of his sport, he simply didn’t rise above it the way Messi did.

None of them measure up to the 5-foot-7 magician. And it’s been established for some time now that Ronaldo, while also surely one of the best ever, isn’t quite up to his level either.

At the very top, there is only Messi. He was the best in 2015, and he’s been better than every other man in any year before it.

After hearing his name called out yet again on Monday, the tiny virtuoso strode up to the stage at the merciful culmination of Monday’s Sepp Blatter-less FIFA festivities. He did so casually, as a matter of routine. He sported an unusually muted tuxedo – no bright red velour number this time, or polka dots. He didn’t lean heavily on the stage, as he once had. He smiled and gave a brief speech. And then he waved at his young son.

No surprise had registered on his face when the announcement was made. Not a single person in the room or anywhere else had been shocked. Because this argument has been settled already.