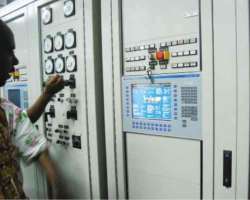 By Bassey Udo
April 21, 2010 12:17AM
Minister of State for Power, Nuhu Wya, said yesterday that the federal government will soon come up with a comprehensive blueprint on the development of our nation's power sector.

Though the minister did not disclose when the stakeholders meeting is scheduled to hold, he said the presidential committee on power meeting held last Monday in Abuja reviewed and fine-tuned the content of the document expected to be unfolded any moment from now, by the Acting President, Goodluck Jonathan.

Earlier, while declaring open the seventh annual conference of the African Forum for Utility Regulators (AFUR), the minister had called for the consolidation of policy reforms in key sectors of the nation's economy, including power, telecommunications and transportation, saying attaining sustained economic growth will remain elusive without it.

Noting that policy reforms in themselves do not necessarily translate into automatic improvements in sector development and economic growth, the minister underscored the role of 'a robust, efficient and effective regulatory framework'.

Global economy and poverty reduction
Drawing a link between global economic growth rate and poverty reduction, the minister told participants at the conference that the level attained by most African nations is still incapable of significant impact, blaming the continent's underdevelopment over the last two decades on inappropriate domestic policy regimes in most countries.

'Based on this view,' he argued, 'the common denominator is centred on economic policy reforms aimed at removing impediments to infrastructure development to boost economic development. It is evident that economic growth and performances have been better in countries that have undertaken and sustained a reasonable measure of reforms in the key sectors of their economy.'

Identifying the major challenge Nigeria is facing as acute imbalance between electricity supply and demand, the minister emphasized the need to tackle the multifaceted problems of the country's power sector in a pragmatic manner, if sustainable, adequate and reliable electricity supply is to be attained.

He said it was the priority attached to the problem that informed the decision by the Goodluck Jonathan administration to undertake several initiatives aimed at redressing the problem within the shortest possible time, adding that deregulation has been identified as the most viable option to guarantee progress in the sector.

'This administration is poised to pursue the sector reforms in line with the provisions in the Electric Power Sector Reform (EPSR) Act, 2005. The overwhelming objective of the electric power policy statement on total liberalization, competition and private sector-led growth is to ensure that Nigeria has an Electricity Supply Industry (ESI) that can meet the needs of its citizens in the 21st century,' he said.

Removing investment barriers
Noting the crucial role of the Nigerian Electricity Regulatory Commission (NERC) in removing all barriers to investment and creating the enabling environment for investors, the minister urged the regulatory body to ensure that the tariff regime in the country is cost-reflective as well as provide the necessary regulatory frameworks for feed-in tariff for renewable power and distributed power generation alternatives.

The NERC Administrator, Imamuddeen Talba, said the AFUR is a voluntary organization of African Utility Regulators established in November 2002 through the instrumentation of clause 10 of the New Partnership for Africa's Development framework document for the promotion of principles and approaches to the regulation of the utility infrastructure in the continent.

Mr. Talba said the current strategic focus of the commission is to encourage private sector participation through effective regulation, pointing out that part of the initiative to help realize its objective has been the approval of the multi-year tariff order (MYTO), currently being reviewed for the sector, development of a regulatory framework for distributed/embedded generation and independent electricity distribution networks, as well as for renewable energy.