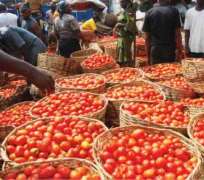 Ayodamola Owoseye
April 21, 2010 12:23AM
Although prices remain high, but the Federal Bureau of Statistics say consumer inflation has dropped compared to the year before.Photo: SUNDAY ADEDEJI

Despite the escalating prices of food items in the country, figures from the National Bureau of Statistics (NBS) indicate that Nigeria's consumer inflation fell to 11.8 percent year-on-year in March from 12.3 percent the previous month.

The country's inflation rate recorded a decrease in March 2010, as it fell by 0.5 percent from what was obtainable for February. The figures from the agency showed that there has been a steady decline in the inflation statistics of the country in the last three months.

The inflation rate stood at 12.3 per cent in January and February, but tilted toward a single digit in March and this came as a surprise to many because of the high price of food stuff due to transportation problems.

Food items cause of inflation
The Central Bank of Nigeria (CBN) and the NBS said the unpredictable change in inflation rates had been largely driven by the changes in food prices.

The urban and rural All Items index supported this figures, indicating that both increased by 0.4 percent 0.1 percent, when compared to what was obtainable in February.

This however had an effect on the inflation rate as the year-on-year average consumer price level as at March 2010, for Urban and Rural dwellers, rose by 7.7 and 13.8 percent respectively.

The report credited the acceleration in the price of food items, which form the bulk of the inflation index, as the reason for the increase in the rise, as the Average Monthly Food prices rose by 0.4 percent in March 2010 when compared with February.

This, some of the traders blamed on the strike embarked upon by the Cattle Dealers Association (CDA) and Food Stuff Merchants' Association of Nigeria earlier in the month, which led to scarcity of food items such as tomatoes, pepper, cattle and others transported from the northern part of the country.

The seven-day strike had caused the price of food items in the market to escalate over 500 percent in some cases as five pieces of fresh tomatoes was sold between N400 and N500 in cases where they were at all available in the market.

A balance
Though the agency recorded a general drop in the monthly inflation, the report indicated that Composite Food Index for the corresponding 12- month average percent change for urban and rural indices rose by 8.4 and 13.6 respectively.

'This made the level of the Composite Food Index (CPI) higher than the corresponding level a year ago by 13.5 per cent putting the average annual index rise to 13.7 percent for the twelve month period,' it stated.

The report attributed the rise to increases in the prices of some food items like yam, meat, sea foods, onions, fresh tomatoes and vegetables.

However, there was a balance: the 'All items less Farm Produce' index, which excludes the prices of volatile agricultural products, fell by 0.2 percent for the March when compared with the previous month.

According to the report, the decline was due to reduction in the prices of cooking gas, liquid and solid fuels, making the twelve-month index till March rise by 9.5 percent while the average annual rate of rise of the index was 9.3 percent for the twelve-month period ending that same month.

Quarterly CPI change
A quarterly change indicated that the 'All Items index' increased by 1.8 percent in the first quarter of 2010 when compared with fourth quarter of 2009.

This is against the 1.5 percent rise recorded in the fourth quarter of the year 2009.