Obama wants to become UN Secretary General after leaving in 2017 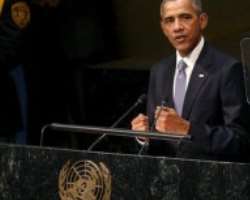 It seems President Obama has no intention of stepping out of the White House and fading from the limelight. No, he's got his sights set on the world stage—this time as secretary general of the United Nations, according to Kuwaiti newspaper Al-Jarida.

But not all world leaders are keen to see this come to fruition, including first and foremost, Israeli President Benjamin Netanyahu.

Israeli Prime Minister Benjamin Netanyahu reportedly is planning payback for President Obama's dismissing Mr. Netanyahu's objections to the Iran nuclear deal last year. Mr. Netanyahu is said to be rallying moderate Arabs to thwart Mr. Obama's bid to become the Secretary-General of the United Nations after he leaves the White House next year.

Mr. Obama has already discussed the issue with Republican, Democratic and Jewish officials in the United States, according to Kuwaiti newspaper Al-Jarida.

Mr. Netanyahu recently is said to have gotten wind of Obama's plans which he calls the Obama Project. “Wasn't eight years of having Obama in office enough?” Mr. Netanyahu is quoted in the Kuwaiti daily as telling associates. “Eight years during which he ignored Israel? And now he wants to be in a position that is liable to cause us hardships in the international arena.”

Further gripes Israel has with President Obama include the U.S. “moving closer to the Muslim Brotherhood, toppling the regime of Hosni Mubarak, and attempts to ally itself with political Islam,” the paper quotes a Netanyahu aide as saying.

“Obama's term is ending with him forging an alliance with Iran , coming to an agreement with it on its nuclear program which in the end will result in a similar scenario that took place with North Korea. Israel will not allow this to happen … It will take all of the necessary steps to prevent Iran from manufacturing a nuclear weapon either covertly or overtly.”

U.N. Secretary General Ban Ki-moon’s term expires in early 2017, making Obama's bid for the position a possibility. Last year after his speech at West Point, some pointed out that he sounded an awful lot like he was campaigning for the role.