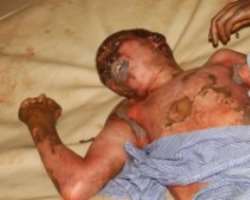 A 22-year-old man in Omu-Aran, Kwara, Sola Akangbe, died in the early hours of Saturday following wounds from a fire allegedly set on him by his biological father, Kehinde.

The deceased, a wheelbarrow pusher, was said to have suffered high degree burns and was confirmed dead by doctors at Ajisafe Hospital, Omu-Aran, where he was rushed to by the police on Friday.

The News Agency of Nigeria gathered that doctors at the hospital battled to save his life as the fire affected most parts of his body.

The deceased was said to have been accused of stealing an undisclosed amount of money from some roadside beggars on Friday and was apprehended and handed over to his father.

The father, a commercial driver, allegedly drove his son to a nearby bush on Omu-Aran-Isanlu-Isin Road, tied his hands and legs before setting him ablaze.

Sola, who was still alive when he was rescued, told his rescuers that his father was responsible for the act.

The mother of the deceased, Rachael, was seen crying in the hospital after the death of her son was broken to her.

The mother, who is a trader based in Odo-Owa, another suburb, told NAN that a friend had notified her of the development on phone before she rushed to the hospital to check on her son.

The mother, who acknowledged that Sola was an unrepentant troublesome fellow, however, expressed shock at the father's action.

She disclosed that although she gave birth few weeks ago, she had divorced Kehinde about seven years ago as a result of irreconcilable differences.

Ajayi Okasanmi, the Police Public Relations Officer in the state, confirmed the incident.

Okasanmi said the suspect was already in police custody and that investigation was ongoing.