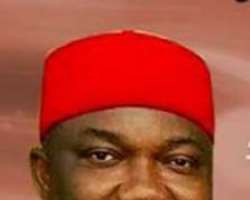 Governor Ifeanyi Ugwuanyi of Enugu State has inaugurated caretaker committees for the 17 local government councils in the state with a charge for them to live within their respective council areas.

The governor also directed all the newly inaugurated Local Government Caretaker committee Chairmen and their deputies to brace for a governance style embedded in strict fiscal discipline in view of the peculiar situations confronting each of their council areas.

Emphasizing the imperative of the new helmsmen domiciling in their local government council areas, the governor told them that the era of running the local government system from hotels was over in the state.

The governor in a speech on the occasion of the inauguration of the new transition committees at the Government House, Enugu, reminded them that government and the people of Enugu State expected good results from them.

He thanked the out-gone chairmen and the councillors for the service they rendered in their respective capacities, wishing them well in their future endeavours.

Click here for details
Governor Ugwuanyi also thanked the heads of personnel management of local governments in the state and treasurers in the council areas for their services during the period under review.

Uzo-Uwani local government council.
Earlier in a speech, the State Commissioner for Local Government, Chief Chijioke Edeoga thanked Governor Ugwuanyi for constituting an amiable team made up of people with pedigree and integrity.

'When you look at the team that assembled here dear governor, the outcome validates your sleepless night before their selection' he said.

Speaking on behalf of the sworn-in caretaker council chairmen and their deputies, Prof. Rose Onah, chairperson of Nsukka local government area, thanked the governor for finding them worthy to serve

the state.
'The chairmen and the deputies are very grateful to you for finding us worthy to occupy this seat of responsibilities and to contribute our own quota to your administration towards the growth and development of Enugu State.'

Prof. Onah promised that they would not betray the governor but will strive to promote the good and aspirations of the state.

She added that, in spite of the current enormous financial challenges in the country, their selection was something to thank God for being chosen in the midst of contenders.

She observed that the challenges of local government councils in respect of financing in the state is enormous, adding that she had also heard about bailout, reminding the governor of the need to bail

them out.
She promised the readiness of the team to strive towards pulling the local government system up and out of problems and odds.