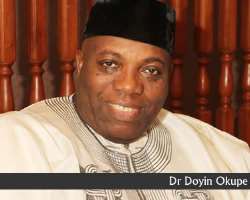 A former Senior Special Assistant on Public Affairs to ex-President Goodluck Jonathan, Doyin Okupe, has accused President Muhammadu Buhari of pursuing a selective war against corruption and ignoring the rule of law.

According to Okupe, recent developments including the arrest of the National Publicity Secretary of the Peoples Democratic Party, Olisa Metuh, is making the President to lose respect.

'Buhari is respected but with the hounding of opposition members, he is losing respect in the eyes of the international community. This selective probe is eroding his integrity,' He told our correspondent in a telephone interview.

Okupe condemned Metuh's detention, insisting that the PDP sourced and utilised its campaign funds the same way the All Progressives Congress did.

He said, 'The Federal Government should not try to dabble into or control the finances of the PDP. The way and manner the ruling party is undertaking its selective probe by hounding opposition leaders is unbecoming and very disheartening.

Click here for details
'Party finances are not the business of the government. The former National Publicity Secretary of the APC, Alhaji Lai Mohammed, cannot deny that he didn't collect money for campaigns during the last elections.

'Why is the Federal Government not asking questions on the sources of the APC's campaign funds? The way the PDP spent billions of naira to fund its campaigns in the media was the same way the APC did theirs? Where did the APC get its campaign funds from? The opposition must be given the liberty to thrive.'

Reacting to an allegation that a former Minister of Aviation, Chief Femi Fani-Kayode, benefited from the $2.1bn arms funds, Okupe said the former minister merely provided a service to the PDP during the electioneering and should not be questioned.

Okupe urged the President to be tolerant of criticism even as he condemned a statement credited to the National Chairman of the APC, John Odigie-Oyegun, in which the APC chair asked Nigerians not to abuse Buhari.

He advised Buhari to emulate Jonathan who he said was insulted by many leaders of the opposition but never retaliated.

Fani-Kayode had said on Wednesday that the All Progressives Congress spent more than the Peoples Democratic Party which was in power during the last general elections.

Fani-Kayode, who was the spokesperson for the Peoples Democratic Party Presidential Campaign Organisation, made the claim while reacting to the probe of some key officials of the PDP by the President Muhammadu Buhari-led administration.

He said, 'No election campaign anywhere in the world, including that of President Buhari was run with just words, goodwill, grass and pebbles and neither were we given free campaign adverts or airtime. All these things were run and paid for with large sums of money.

'This is especially so with publicity and media because that was the lifeblood of the various campaigns. I repeat, there is nothing that we did in the campaign organisation or that my directorate did that Lai Mohammed, Buhari and the APC did not do in theirs.

'As a matter of fact, they spent far more than we did but I have no idea where they got their money and whether they were private or public funds.'