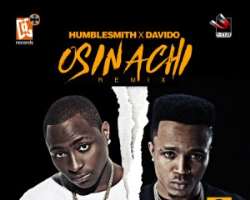 Barely two days after the release of popular inspirational song 'Osinachi' by singer, Humble Smith, where he featured Davido, his fans have come pouncing on the singer after they listened to lyrics of Davido's part.

Funs had anxiously waited to listen to the remix of the song to see how Davido will do justice to it but their wait was turned to murmuring as some fans got upset at the way Davido turned his present baby mama crisis into song.

In the song, Davido, stated that it is not by force to go to Dubai, asking if that was what caused the fight but noted that he is just laughing at the way things are playing out.

He further stated that people are out to destroy his career and also take away his favour but noted that he has forgiven all those accusing him.

Some fans said, “Davido carry him family problem enter the song, wahala dey. Humble Smith you disappointed your fans this is the worst colabo ever. What has Davido issue got to do with Osinachi remix? Just because he is a big name you messed this song up no hating to OBO, I love all his works but spoiling this beautiful song am disappointed.”