I have Once Had a Secret Affair with an Actress…Actor, Chris Bassey Confesses 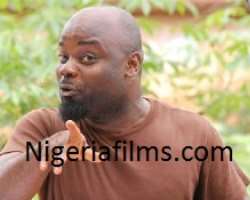 It's a New Year and lots of Nigerian celebrities are cooking up lots of things to unveil them soon to their teaming fans but Nollywoodgists.com will definitely continue to knock on the doors of some of these celebs to get to know things they are doing or hiding from their fans.

Recently, Nollywoodgists.com caught up with Nollywood actor, Chris Bassey and since he has been busy on set, we decided to throw some funny questions at him ranging from acting to his relationship with women.

What do you love about acting?

Well firstly I started as a Writer, though have got that love for acting, but sincerely there's more passion in writing than acting. You know sometimes you just have to try other angles and it mostly ends up that the other angles favours sometimes.

If you were asked to pick between acting in Nollywood and Hollywood which will you pick and why?

Laugh... Even you self already know the answer... You start somewhere hoping to get to that greater Height. Anyway let me surprise you a bit. I have featured once in a Hollywood movie. That's OMBAG... a Thai movie back in 2005. They needed blacks to fill in some scenes and I was there to occupy

Have ever slapped a woman before?

Hmmmmm.. I'm not a woman beater.

At what age did you had your first sex?

Hmm, anyway I was just 17, I guess and it was with someone over 7years older than me, someone I considered my School teacher.

How can a lady turn you on?

Laugh. Abeg no vex I no fit answer that one oh... but it has to do with upper part of my body.

Can you date or marry an actress?

We go try try try, until we succeed at last.

Have you ever had a secret affair with an actress?

Hmmmmm, Yes I have.

Can you marry a single mother?

I got no problem with that.

Childhood was great; sometimes I use to wish the world could be rewind.

What are you planning on doing this year?

I am planning a European tour soon, and watch out for my first music single... but not this regular kind of songs you listen to. Also got some comedy skit am working on. There will be a lot to do this year compare to other years.

Still single, when do you plan on getting married?

Marriage is not all about putting a woman inside the house, it takes more than that but am putting an end to single life this year hopefully.