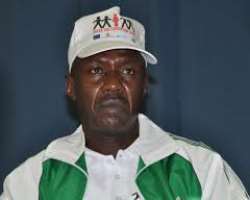 The Ekiti Justice Group (EJG) has described as false,

claim by the Economic and Financial Crimes Commission (EFCC) Acting

Chairman, Ibrahim Magu that the commission do not have any petition

against chieftains of the All Progressives Congress (APC), saying; “it

against former governor of Ekiti State, Dr Kayode Fayemi by the State

Government and concerned groups.”
While trying to defend allegation of political witch hunt against the

EFCC, Magu had said; “Such accusations have come up a lot, but, we

work with petitions before us, in fact, I am eager and waiting for

something from the other side, but nothing has come so far.”

However, reacting through a statement signed by its National

Secretary, Comrade Ebenezer Olaleye, the EJG said it was on record

that the Save Ekiti Coalition (SEC) wrote petition dated September 26,

September 29, 2014 and that the State Government even had to write a

letter to the EFCC last year September, reminding the commission of

its petition.
EJG said it was a clear confirmation of EFCC partisanship for Magu to

claim ignorance of the SEC petition duly received by the commission

with attached documents on September 29, 2014.
The group said the EFCC chairman should rather come clean and tell

Nigerians that under the President Mohammadu Buhari led APC

government, only those opposed to the federal government must be

presented as corrupt while APC chieftains who are supporting the

stole their states blind.
The SEC petition signed by its Secretary, Comrade Oke Ayodele was

Governor, Dr. Kayode Fayemi and others: call for investigation and

prosecution.”
The group alleged that the frauds were perpetrated through N2.6

(SUBEB) and Local Councils funds through contracts worth N4.2bn,

inflation of road contracts worth over N10bn and diversion of N1.2bn

FADAMA fund.
The petition read in part; “Contract for the construction of a New

(representing 25% of total contract sum) had been paid to

(representing 45% of total contract sum).
“While the Project contractor was paid 25% of the contract sum in

2012, why was the consultant paid 80% of the contract sum? Information

available to us indicates that the Consultant was hurriedly paid 80%

“Contract for the construction of earthwork for the New Governor's

Office was awarded to PONTI-ITALWARE Nig Ltd on March 3, 2012 at the

contractor. The New Governor's Office was proposed to be constructed

from the N25bn Bond obtained by the State Government, with N3,

the site has been abandoned, with no significant work done.

“By our own assessment, what was spent on the site cannot be more than N5m.

for the earthwork was deleted, raising poser as to why the payment was

Bureau of Special Projects (under the Governor's office), headed by

Mr. Kelekun. The contracts were for renovation of schools, supply of

school furniture and construction of classrooms. Funds for these

projects were taken from SUBEB and Local Governments accounts.

“A total of N2.1bn was paid from SUBEB and LG accounts to these

contractors even before the commencement of work, and over 40% of the

payment was diverted into private pockets.
“In the 2014 Capital Projects Report, payments to the contractors

were presented as;  a: Atlantic Offshore & Properties – N1,

Properties, only 60% work had been done, meaning that Atlantic

township roads were embarked upon in each of the 16 LGs. Contracts for

the rehabilitation of these roads were awarded without any input from

local councils allocation.
“For instance, rehabilitation of 5km roads in Moba LG was awarded for

Fayemi were also given the contract. Most of the road projects have

been abandoned.
“In 2010, the World Bank in collaboration with the Federal Government

Government was expected to provide counterpart fund of N100m. FADAMA

III was for LIVESTOCK farmers. However, the N100m counterpart fund was

not provided by the State government until 2013.
“Instead of using this fund for the purpose for which the World Bank

and FG released it, the State Government set up a scheme called Youths

FADAMA III grant from the World Bank and FG to fund it. 6-10 YCAD

farmers were purportedly given N6 million each while FADAMA farmers,

who registered FUGs of Ten (10) farmers collectively applied for six

hundred and ninety thousand Naira only (N69,000.00 per farmer) were

left unfunded.
“There were just 142 YCAD members, but the government claimed they

were 15,000. “The government also claimed that it bought NINE Tractors

at N98m and constructed abattoir for N18m. However, the tractors

State by the federal government during the immediate past

administration of Engr Segun Oni.
“Also, the N100m counterpart fund paid by the State government into

FADAMA's ECO Bank, Ado-Ekiti account was later returned to the

plantation. Moves are now being made to siphon this fund.”