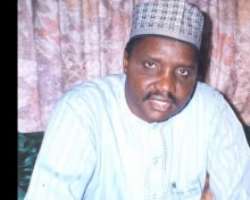 • PDP ex-boss, son get N300m bail each
• Family seeks release of Metuh
The Economic and Financial Crimes Commission (EFCC) has confirmed the arrest of a former military administrator of Kaduna State, Brig-General Jafaru Isa(rtd), in connection with the alleged $2.1 billion arms scandal involving some prominent figures in the country.

Isa, who administered Kaduna State from December 1993 to August 1996 under Gen. Sani Abacha regime, is the first chieftain of the All Progressives Congress (APC), and an associate of President Muhammadu Buhari, to be arrested since the commencement of investigations into the arms procurement scandal that began late 2015.

Others arrested before him include the former National Security Adviser (NSA), Col. Sambo Dasuki (rtd), former Defence Minister, Haliru Bello Muhammed, former Minister of State for Finance, Bashir Yuguda, media mogul, Raymond Dokpesi, Peoples Democratic Party (PDP) spokesman, Olisa Metuh, all of whom belong to the opposition party. The PDP, in the past week, had alleged that the arms probe was a ploy to intimidate the opposition because no member of the ruling APC had been arrested or invited by the anti-graft agency.

Isa is believed to have received about N100 million from the office of the former NSA. Spokesman to the EFCC, Wilson Uwujaren confirmed his arrest to The Guardian.

Meanwhile, the Federal High Court, Abuja Division has granted bail to former chairman of the PDP, Haliru Mohammed Bello and his son, Abba, in the sum of N300 million each.

The duo are standing trial over their alleged complicity in the arms deal saga.

Delivering his ruling on the bail application brought by Bello and his son, Justice Ahmed Ramat Mohammed held that since the offences for which they were brought before him do no carry capital punishment, he had no trouble acceding to their request.

Justice Mohammed held that the fact that the Nigerian constitution presumes the accuse persons innocent until proven otherwise made the exercise of his discretion in their favour easy.

The judge said he had no doubt the defendants cannot interfere with course of justice since the Prosecution said they had concluded investigation into the matter before arraigning them.

Accordingly, he admitted the former PDP boss to bail in the sum of N300 million and ordered him to produce two sureties, one of whom must be a civil servant of the rank of a director, who must have a landed property in Abuja with a N300 million value. The said sureties, he ordered, must swear to an affidavit of means and the particulars of the sureties shall be verified by the court.

The sureties, the Judge held must also submit title document of the landed property to the court as well as their recent passport photographs.

Also yesterday, the family Metuh asked that he be released or charged to court. In a statement by Chief Gilbert Metuh on behalf of the family, it frowned at the media trial he is being made to go through while still being held.Guardian