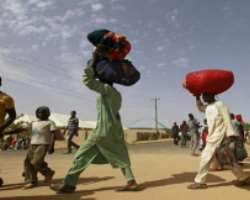 The Federal Government on Thursday said it is making plans for a post Boko Haram era.

This is coming days after President Muhammadu Buhari said it has  'technically won the war'  against Islamist Boko Haram militants.

The Minister of Interior, Lieut. Gen. Abdulrahman Dambazau (Rtd), told the West Africa Conflict and Security delegation at a meeting in Abuja that the Federal Government is working on how to deploy security operatives to the region to ensure stability.

Head of the West Africa Conflict and Security delegation, Catherine Weiss, who visited the minister in Abuja said the conversation it began on violence mapping and strategic risk assessment must continue to holistically win the war.

This is one of many promises in the pipeline but first Nigerians are clearly anticipating an era of zero terrorist attacks on innocent citizens. - Channels.