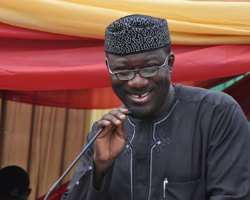 Youths in the All Progressives Congress (APC) in Ekiti State, under the aegis of Ekiti APC Youths Congress (EAYC) has described the change of Senator Babafemi Ojudu’s appointment from Special Adviser on Political Matters to the President to Special Adviser on Political Matters to the Vice President as the handiwork of the Minister of Solid Minerals and former governor of the State, Dr Kayode Fayemi.

The youths, which warned Fayemi to desist from working against the

Yato’ group, disclosed that as at Monday, Senator Ojudu was pencilled

down as Special Adviser on Political Matters to the President, a

Tinubu.
Reacting to Senator Ojudu’s appointment, the youths said in a

statement signed by their Convener and Secretary, Mr Tope Ogunkuade

and Comrade Tunji Adeleye, that they were happy that efforts by Fayemi

to outrightly frustrate the appointment failed.
“Even though what our leader, Senator Babafemi Ojudu was pencilled

down for was Political Adviser to the President, we are happy that at

least, his contributions to the election of President Buhari was

recognised,” the youths said.
While urging Fayemi to stop seeing those in the Action Group APC as

opponents that must be crushed, the EAYC said standing against

Ekiti State and the APC.
They congratulated Senator Ojudu, urging him to not to relent in his

efforts to revive the APC in Ekiti State.
EAYC reiterated its support for the South Senatorial District to

produce the next governor of the State.
“As we have said before, it remains our position that our leaders

Senator Gbenga Aluko and others that have declared interest in the