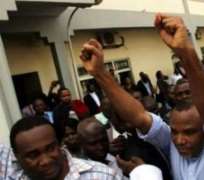 The human right body expressed concern in a statement released in Onitsha, Anambra State, that Buhari had formed the habit of cracking down on Igbo leaders at the slightest provocation.

The statement as released by the chairman in the zone, Dede A. Uzor, CD recalled that Kanu was arrested on October 17, 2015 and a court of competent jurisdiction granted him bail, yet Buhari refused to release him, just as he also refused to obey the court order which granted Dasuki bail to travel abroad for his medical check-up.

CD regretted that up till date, the duo are still languishing in the dungeons of the Department of Security Services, DSS, adding that Tuesday's arrest of Metuh was viewed as a clandestine move to silence opposition.

The statement, therefore, gave Buhari a seven-day ultimatum within which to release the above named individuals from detention or else CD would mobilize more than 70 million Ndigbo, both home and in the Diaspora, to carry out a mass protest against their continued detention.

“Buhari should tell us how many All Progressives Congress, APC, members he has arrested for corrupt practices or does it mean that APC members are all clean, including the former President, Olusegun Obasanjo, who allegedly spent over $16 billion on power sector reform without anything to show for it?”