The War Between APC And Akwa Ibom People 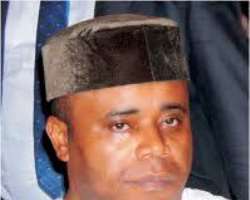 The All Progressives Congress (APC), is at war with the the Akwa Ibom people for refusing to "welcome" and imbibe the tenets of an imported imperialistic political party in the state. The APC is a product of contradictions; a group of selfish, greedy, and self- serving politicians whose ultimate aim in politics is material aggrandizement and primitive accumulation of capital.

Professor Barry Hampe, a Political Scientist and one of the most reputable scholars in party politics puts paid on the features of a party that is people- oriented and ideology- driven: "A good political party, if such were possible, would have a clear political philosophy, consistent with governance in a democratic republic. It would attract members by the strength of that philosophy, rather than by modifying it to pander to special interest groups.

.....Its members in office would focus on doing the people's work, including making compromise with members of other parties when necessary so that the perfect does not become the enemy of the good. It would stand for maximum personal liberty and economic reality. It would at all times strive to ensure that government is never any larger than it needs to be".

Flowing from this theoretical premise, it is crystal clear that the APC has failed Nigeria and Nigerians. The party was built on a cracked foundation and on a false substratum. Its leadership component understands nothing other than deepening the extractive and accumulative essence of the Nigerian state.

Barely few months in office, President Muhammadu Buhari, the leader has demonstrated to the whole world that he is unrepentantly alien democratic norms, culture and practice. He directed the DSS invasion of the Akwa Ibom governor's lodge to satisfy the exploitative instinct of his wicked allies in the state. Shamefully too, the President has been unstatesmanly in dealing with perceived political foes- particularly those he believed have contributed in one way or the other to his numerous electoral failures since 1999 or his ouster as Head of State in 1985. The case of Chief Raymond Dokpesi, Col. Sambo Dasuki, Nnamdi Kanu, among others is familiar to Nigerians. It has been reported that President Buhari has flagrantly ignored court orders granting bail to Colonel Dasuki and Nnamdi Kanu. Where then is the independence of the Judiciary, which is the beauty and fragrance of democracy? Is this APC's model of democracy?

Instead of constituting a Truth and Reconciliation Commission, in the South African model, build confidence among the people and strengthen the institutional component of the state, the APC government is going about selective justice, annihilating only PDP members and sympathizers. The latest being PDP spokesman Olisa Metuh and former PDP Chairman Haliru Bello. How shameful!

In Akwa Ibom State, the APC-led federal government has planted surrogates; men with questionable character and unquenched lust for power, as allies to entrench their extractive and subversive goals.

For instance, Umana Okon Umana, the APC gubernatorial flag bearer in Akwa Ibom State is known for his checkered public service history. It is questionable, just as critical minds keep asking the source of UOU's stupendous wealth. It has been speculated by pundits that he had stolen more public funds than any other public servant since the creation of Akwa Ibom State in 1987. His intoxicating wealth has made him seek power, precisely the office of governor by all means, irrespective of the wishes of the people.

It begs to ask, who the pivots of APC in Akwa Ibom State are. It's either those who were disgraced from office for their excessive accumulative instinct, those who wished they could live from the treasury of the state , those who had lost touch with their people at the grassroots and needed a platform to re-launch their career, and those whose overbearing quest for power put them on collision course with the political system.

Another very glaring feature of these political gladiators is that they represent an "unholy alliance" "amalgam of opposites"- those who hitherto had one personality or ego crisis with each other, but engaged in an extra-ordinarily fragile union, to vent their personal misgivings and anger against the political system, mainly because they either could not win at the PDP primaries or were not properly accommodated by the immediate- past administration owing to their selfish or rather inordinate ambitions.

On April 11, 2015, the All Progressives Congress was rejected by the people of the state in the ballots. While the ruling PDP scored over 996,079 votes, the APC had a paltry 89,865 votes. By possible extrapolation, the APC was roundly defeated and secured less than ten percent of the total votes at the polls.

The people of Akwa Ibom prefer the PDP and the Divine Mandate as represented by Governor Udom Emmanuel. As I’d noted in my last treatise, God chooses a leader and gives to every society the kind and genre of leader it deserves. I also used an example of Saul who misrepresented God's benevolence and chose to play - god. That was why when the glory of God departed from Saul, he began to have some degree of insanity which ensued till the day he died (1 Samuel 18: 10). Does this not justify the commonly used axiom that "he whom the gods want to destroy, they first make mad"?

The people realized that leadership is the soul and ultimate driver of development and needed a leader who could deepen the infrastructural revolution in the state through the creation of jobs, amelioration of poverty and reduction of social inequalities hence the emergence of Udom Gabriel Emmanuel as fourth democratically elected governor of Akwa Ibom State.

The Divine Mandate is a social contract between Governor Emmanuel and the people of Akwa Ibom State, whose resolve is unruffled, irrespective of the antics , intrigues and propaganda of the opposition APC in the state, which has deployed a conspiracy theory aimed at upstaging the status quo in the state. Their alliance with the Hausa/Fulani/ Yoruba power elite was perfected with the engagement of surrogates for the purpose of smearing the character of the purveyor of the people’s mandate, Governor Udom Emmanuel.

APC's current battle with the Akwa Ibom people is geared towards desecrating and demonizing the Governor and ultimately destroying the goodwill which he has garnered ; an indisputable asset for the political, social and economic emancipation of the state. The APC is fully aware that, with the degree of goodwill at the disposal of Governor Emmanuel and the proportion of support by both 'the productive elders' and the youth of the state (optimum population), the governor can always have his way in enacting and executing good policies for the wellbeing of the people.

A political party whose ideology is antithetical to justice and equity is to say the least, anti- people . The APC failed the litmus test when it vehemently opposed zoning- an egalitarian political culture which the Akwa Ibom people enthroned in the state, and crowned it with the search, adoption and support for the tuskbearer of the Divine Mandate, Governor Udom Emmanuel.

The people of Akwa Ibom see the APC's incursion as typified in the impending verbal and online debate as a battle to save the soul of the state from the "spirits of doom"- the fallen angels. Winston Churchill also amplified the importance of resolve, political will and timely intervention to avoid unanticipated consequences by asserting that, “If you will not fight for right when you can easily win without bloodshed; if you will not fight when your victory is sure and not too costly; you may come to the moment when you will have to fight with all the odds against you and only a precarious chance of survival. There may even be a worse case. You may have to fight when there is no hope of victory, because it is better to perish than to live as slaves.”