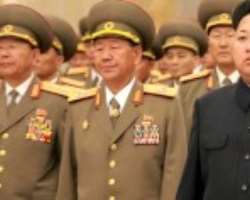 North Korea said it had successfully conducted a test of a miniaturized hydrogen nuclear device on Wednesday morning.

The announcement on North Korean state TV followed detection of a 5.1 magnitude earthquake near its known nuclear test site earlier.

The nuclear test is the fourth by the isolated country, which is under U.S. and UN sanctions for its nuclear and missile programs.

North Korea has hinted before at the possession of “stronger, more powerful” weapons, but Kim’s remarks were believed to be the first direct reference to an H-bomb.

The announcement by North Korean state media came two days before Kim’s birthday and just over four years after he succeeded his father as leader of the Stalinist state.

Suspicions over a possible nuclear test — Pyongyang’s fourth — were first raised by seismologists who said they had detected a 5.1 magnitude tremor next to its main atomic test site in the northeast of the country.

The website of the China Earthquake Network Centre described the seismic activity as a “suspected explosion”, while the Japanese government said there was a strong possibility that “this might be a nuclear test”.

The US Geological Survey said the epicentre of the quake — detected at 10:00 am Pyongyang time (0130 GMT) — was in the northeast of the country, some 50 kilometres (30 miles) northwest of Kilju city, placing it right next to the Punggye-ri nuclear test site.

Any confirmation of the test will trigger widespread international condemnation of North Korea, which has already conducted three nuclear tests in 2006, 2009 and 2013 — all at Punggye-ri.

It would certainly result in a tightening of international sanctions imposed after the North’s previous nuclear and ballistic missile tests.

In Seoul, the presidential Blue House called an emergency meeting of the National Security Council, as officials scrambled to confirm the precise nature of the tremor.

“While there are no indications that a nuclear test is imminent, the new tunnel adds to North Korea’s ability to conduct additional detonations over the coming years if it chooses to do so,” they said at the time.

A nuclear test is as a major slap in the face to the North’s chief ally China and extinguish any chance of a resumption of six-country talks on North Korea’s nuclear programme that Beijing has been pushing for.

After its last nuclear test in 2013, the North restarted a plutonium reactor that it had shut down at its Yongbyon complex in 2007 under an aid-for-disarmament accord.

The Yongbyon reactor is capable of producing six kilograms (13 pounds) of plutonium a year — enough for one nuclear bomb Pyongyang is currently believed to have enough plutonium for as many as six bombs, after using part of its stock for at least two of its three atomic tests to date.

It is still unclear whether the 2013 test used plutonium or uranium as its fissile material.

A basic uranium bomb is no more potent than a basic plutonium one, but the uranium enrichment path holds various advantages for the North, which has substantial deposits of uranium ore.

Uranium enrichment carries a far smaller footprint than plutonium and can be carried out using centrifuge cascades in relatively small buildings that give off no heat.